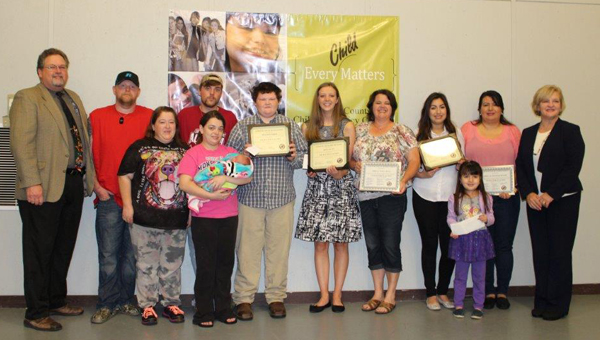 Three Shelby County students from the Day Program, the Shelby County College and Career Center and the Linda Nolen Learning Center were honored for exemplary character during an April 16 Drug Free Coalition meeting.

Stephany Tejada, Kiera Hiatt and Brandon Erwin were given Character in Action awards for outstanding qualities such as responsibility, kindness and leadership.

Created by a partnership between the Shelby County, Alabaster and Pelham school systems and the Shelby County Juvenile Court, the awards recognize students who display outstanding character.
Tejada, a student at the Day Program, was noted for her respectful, thoughtful behavior and her positive attitude.

“She treats everyone with the upmost respect and dignity and she does so with a smile,” Tejada’s nomination form read. “I have witnessed her offering her seat to others on more than one occasion; she places the other person’s comfort over her own. I have never heard negative, demeaning, or degrading words spoken by Stephany; to the contrary, when she presents herself, she is always polite, humble and respectful.”

Hiatt, the Student Government Association president at the Shelby County College and Career Center, was recognized for her leadership, initiative and compassion.

“Kiera is the SGA president and was also the organizer for the Breast Cancer Awareness activities at the College and Career Center,” Hiatt’s nomination form read. “In addition, Kiera has participated in multiple Beta club service projects including making cards for local nursing home residents… Kiera is known to be an excellent leader, the kind people want to follow and do their best for.”

A student at the Linda Nolen Learning Center, Erwin was commended for his eagerness to help others and attention to his education.

“He helps teachers walk students to their buses, helps with set up for school programs, and even has offered to help the custodian empty out the trash,” Erwin’s nomination form read. “This student has a very big heart; it shows through his sharing and taking extra time to help others.”