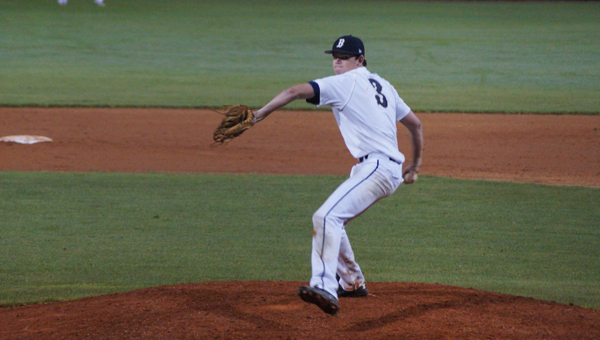 NORTH SHELBY – The Briarwood Christian baseball team (22-6) relied on masterful pitching and abundant run support to sweep Chelsea in the opening round of the 6A state playoffs, claiming a pair of convincing 9-3, 7-3 victories on Saturday night at Jay D. Kynerd Field.

Briarwood’s starting pitching tandem of Carson Cupo and Trey Mitchell flummoxed the Chelsea lineup in each game of the doubleheader, as the duo limited Hornet batters to nine hits over 11 and two-thirds innings.

Cupo, the Lions’ starter in game one, kept the Chelsea offense in check during his five innings on the mound, surrendering only two runs on three hits while preventing the visitors from gaining more than a one-run advantage.

“Carson pitched better than he had the last couple outings,” Briarwood head coach Steve Renfroe said. “I think that was a big lift for our guys.”

Mitchell followed up Cupo’s successful start with a pristine performance of his own, pitching six and two-thirds innings with impeccable efficiency. Mitchell cruised through the game’s first 18 outs, giving up just three hits while striking out nine of the first 15 batters he faced.

“Carson and Trey set the tone for us,” Renfroe said. “They allowed the hitters just to get into their approach and battle.”

The Lions’ offense backed up the strong pitching with a surplus of run support, totaling 16 runs on 23 hits. While centerfielder Jake Morris and first baseman John Michael Pegusky paced the team with four hits each, all Briarwood batters contributed at least one hit over the course of the two games.

“That’s really the makeup of this club. They battle one through nine and that gives us a chance going against some of these arms,” Renfroe said.

The Lions, who have now won four straight games, will play either Pell City or Homewood in the second round of the playoffs next weekend. The two teams split Saturday’s doubleheader and will play the deciding game of the series on Monday.

Pelham advances to second round of 6A playoffs

Resident Pelham ace Sam Finnerty threw a complete game in the first game of the first round of the 6A... read more