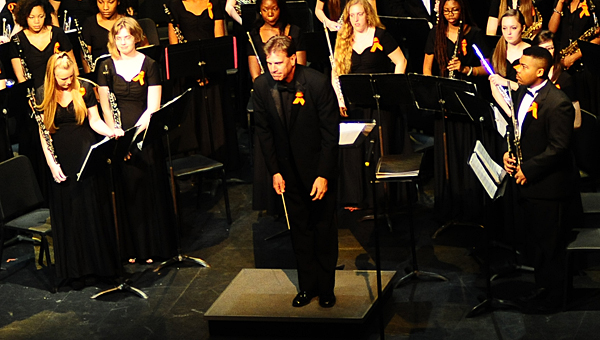 “I just try to keep my head down and do my job,” Bubbett said during an April 20 phone interview. “I didn’t expect to get anything like this.”

Bubbett and his family traveled to Mobile on April 17 to attend the all-state band festival, and came back with a prestigious award. During the trip, Bubbett received the Bandmaster of the Year award from the Rho chapter of the Phi Beta Mu international bandmasters fraternity.

Each year, the chapter votes to award the honor to one of its members based on the candidate’s contributions to the music community.

“To be voted on something like that by your peers is awesome,” Bubbett said. “I’m very humbled and very honored to receive this, but it’s really because of the incredible students at Thompson High School.”

While in Mobile, Bubbett got to see one of his students, Brady Nichols, perform in the Alabama All-State Honor Band. Nichols also earned first chair at the Honor Band of America concert in Indianapolis in March.