ALABASTER – A 49-year-old Alabaster woman originally facing a felony charge in connection with stealing from a city swimming pool club will spend the next couple of years on probation after recently pleading guilty to a reduced charge. 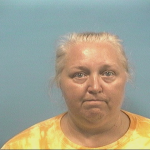 Through a plea deal, Johnson pleaded guilty to one misdemeanor count of third-degree theft of property in late February, and was sentenced to a total of two years on probation, which will be supervised by Shelby County Community Corrections.

According to Johnson’s arrest warrant, she stole and cashed two checks belonging to the Alabaster Recreational Club totaling $6,311 between May 9, 2014, and June 10, 2014.

Alabaster Police Chief Curtis Rigney previously said the arrest came after management at the Recreational Club reported “discrepancies” in the facility’s financial reports. Rigney said police investigated the claim, and “determined there was probable cause” to arrest Johnson.

The Alabaster Recreational Club is a private pool and recreation facility off Fourth Avenue Southwest.

As part of her sentence, Johnson also was ordered to pay $6,311 in restitution to the Recreational Club, and must avoid contact with the establishment.