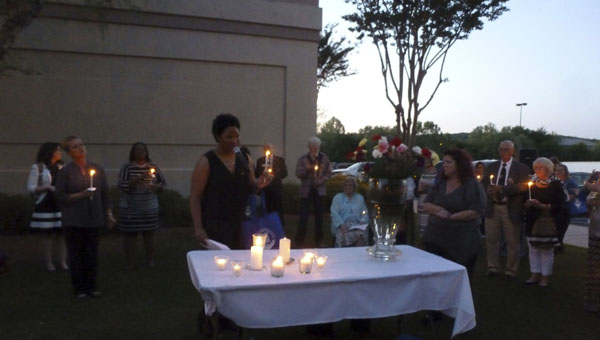 Advocate Awards Presentation and Banquet hosted by the SafeHouse of Shelby County and the Central Alabama Chapter of VOCAL (Victims of Crime and Leniency) Emcee Eunice Elliott, NBC 13 Channel 13, concludes the Candlelight Service remembering those murdered of violent crime. A candle was lit and flower placed in the vase for each victim for their loved one by their survivor. (Contributed)

PELHAM – “Loved ones, taken, but not forgotten” was the theme at the Advocate Awards Presentation and Banquet hosted by the SafeHouse of Shelby County and the Central Alabama Chapter of VOCAL (Victims of Crime and Leniency) on Monday, April 20 at the Pelham Civic Center.

The banquet was the Alabama kickoff to National Crime Victims’ Rights Week.

The civic center was filled with survivors personally affected by a loved one’s murder and victims of domestic and sexual abuse along with those who advocate for them.

Two survivors shared their personal tragedies. Gerri Budgick King spoke of the horror of her husband’s murder and her being beaten in their home by a known person.

She shared that God’s grace is sufficient for any tragedy in life.

Tahiera Monique Brown spoke of her horror being stalked and then held hostage with her children for two years.

She was raped and beaten until left in a coma.

She compared each act of abuse as a nail in her coffin; each step toward recovery removed a nail in that coffin.

Following these incredible, heroic women’s speeches, Attorney General Luther Strange spoke of his personal commitment as well as his office for victims.

He thanked all who serve victims and advocate for them: Law enforcement, prosecutors, medical professionals, counselors and more.

Miriam Shehane, VOCAL founder, led the candlelight service outside after the awards presentation.

Each survivor lit a candle and placed a flower in a large vase for their murdered loved one with individual crosses with the names and date of their murder overlooking the solemn ceremony.