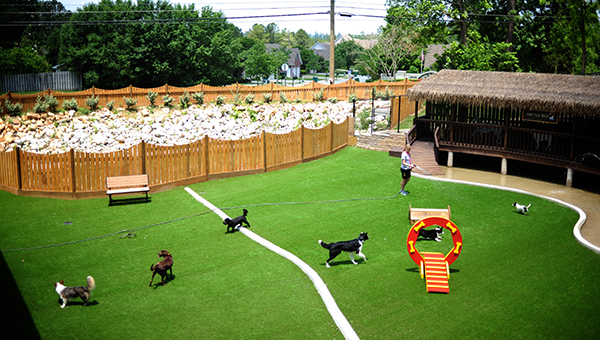 The city of Helena is looking at new locations to place a proposed dog park and adoption center for residents to use. (File)

HELENA–The city of Helena continues to explore the possibility of welcoming a new dog park to the city, but the current concern is finding the right location for the proposed dog park and animal adoption center.

At the April 6 Helena Council meeting, Two by Two Executive Director Sonya King presented a map of Joe Tucker Park with a layout of a proposed dog park and climate controlled animal shelter to the council.

King described the proposed park as a place that will really “draw people in, regardless if you’re an animal lover or not. We plan to create it where it’s very serene and a very inviting place for people to come.”

King was back at the Helena Council Meeting on Monday, April 20, to further discuss the proposed dog park and Helena Mayor Mark Hall and other council members agreed to take Joe Tucker Park off the table as a possible location because of potential noise complaints.

Hall and the rest of the council members are unanimously in favor of bringing a dog park to Helena however.

“While the majority of residents I spoke with are in favor of a dog park, they were worried about noise and additional problems the Joe Tucker location may have,” said Hall. “I agree that we should look for a more suitable location and we will continue to look for a suitable area as we all agree this project will be an asset to the city.”

One possible location for the dog park and adoption center is land the city owns on Shelby County 52 near Shelby County 95, which is surrounded by wooded areas that is owned by Plantation Pipe.

The city would most likely lease the land for the project to Two by Two pending legal clarifications according to Hall.

The project is set to include a climate-controlled animal shelter, separate locations for large and small dogs to play and a memory garden for owners to remember their pets.

King noted that the project would be funded entirely by donations collected by Two by Two Animal Rescue.

Two by Two Rescue is a non-profit and no-kill organization, and King wants people to adopt Helena animals from Helena in the future.

More information on Two by Two Rescue can be found at Twobytworescue.com.

By NEAL WAGNER / Managing Editor ALABASTER – A 23-year-old Maylene man is being held in the Shelby County Jail... read more