Galloway overcomes scare on ‘Dancing with the Stars’ 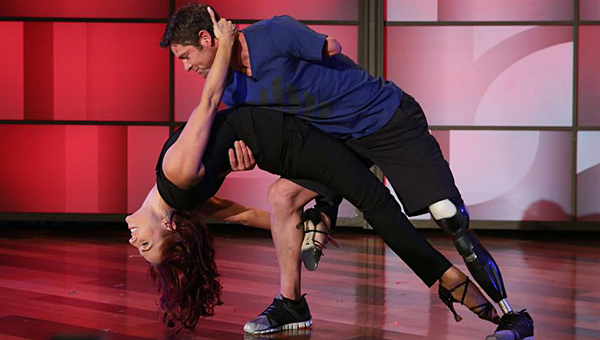 Alabaster resident Noah Galloway and his dancing partner, Sharna Burgess, are safe on the Dancing with the Stars competition for at least another week. (Contributed)

Alabaster resident Noah Galloway and his dancing partner, Sharna Burgess, got a scare while hearing the results of the April 20 show of “Dancing with the Stars.”

While hearing the results of the combined judge scores and viewer call-in votes during the show, Burgess and Galloway were named among four couples in jeopardy.

But at the end of the night, viewer votes came through to keep the duo alive in the competition for at least one more week.

During the April 20 spring break-themed show, Galloway and Burgess performed a rumba routine and received a 29 out of 40 from the judges. During the routine, the pair hesitated for a moment, drawing some self-criticism from Galloway.

But despite the slight hiccup, the duo received plenty of praise from the judging panel.

“I think there was an incident because everything came to a stop for a few bars,” judge Len Goodman said. “But I tell you, you are an amazing guy.”

Galloway, who lost portions of his left arm and leg in an improvised explosive device attack in Iraq in 2005, said he was “happy” with the scores.

“I don’t think you have to worry,” judge Julianne Hough said. “We know the connection you guys have and we know how strong it is.”

“Forget about that little incident, because what I think is: What you two do is so intuitive and is almost magnetic,” Tonioli said. “You anticipate each other’s positions as if by magic. I think it was a wonderful rumba by you. You shouldn’t worry at all.”

“The rumba is a very difficult dance. It’s all about the nuances and subtleties,” Inaba said. “Keep your head on straight. You deserve to be here. Hold your space.”