ALABASTER – A 23-year-old Maylene man is being held in the Shelby County Jail on bonds totaling $30,000 after he was charged with allegedly selling marijuana at an Alabaster apartment complex. 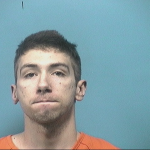 The Shelby County Sheriff’s Office arrested Thomas Ernest Darby III, who lists an address on Yellowleaf Circle in Maylene, on April 18 and charged him with three felony counts of unlawful distribution of a controlled substance.

According to Darby’s arrest warrants, he allegedly sold marijuana in the 1500 block of Windsor Court on three separate occasions in 2014: Once on Jan. 9, once on Jan. 21 and again on March 12.

Unlawful distribution of a controlled substance is a Class B felony, according to Alabama law. If convicted, Darby could face up to 20 years in prison per charge.