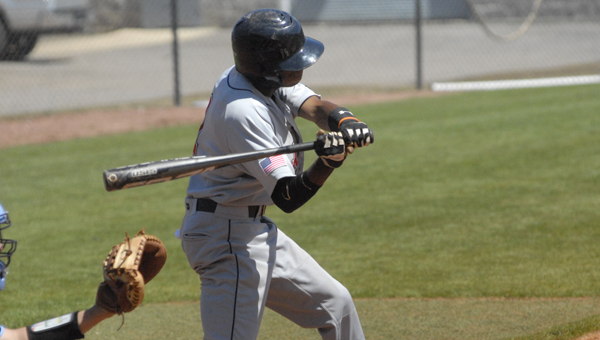 Brandon Whitaker and the Oak Mountain Eagles defeated crosstown foe Spain Park in both teams’ last game of the season by a score of 4-0 on April 20. (File)

HOOVER – Both the Spain Park Jaguars and Oak Mountain Eagles will miss the 7A playoffs this season. The two squads reside in the most difficult baseball region in the state. Spain Park, ranked fifth in class 7A in the final ASWA ranking, finished third in Area 6 behind 7A Nos. 1 and 2 Vestavia Hills and Mountain Brook, respectively. Oak Mountain finished third in Area 5 behind No. 3 Thompson and No. 6 Hoover. With such a deep concentration of talent, these two squads were the odd men out this season, but had one last chance to take the field, by happenstance against each other, on April 20.

Blake Schilleci took the mound to start the game for the Eagles and never relinquished his post. He hurled 113 pitches over seven innings of work, allowed only four hits and struck out seven. Opposing him was Julian Samaha, who threw three scoreless innings before being replaced by Billy Riley.

The game remained scoreless through three innings before Oak Mountain finally broke the stalemate. Graham Hackbarth hit a leadoff single and subsequently advanced to third on two sacrifice fly balls. Ethan Holsombeck reached base via an error by the Spain Park shortstop, Collin Walker, which allowed Hackbarth to score and the Eagles to take a slim lead.

The 1-0 score held until the top of the sixth inning, when the Eagles opened things up slightly. Chase Stiffler hit a leadoff double to left field and later scored on a Holsombeck sacrifice fly while Daniel Salchert, a pinch runner for Mason Williamson, who had singled to left, and Garrett DeAraujo both scored in the inning as well to give the visiting team a 4-0 lead from which Spain Park could not recover, and the Eagles won by the 4-0 margin.

Rodney Anderson, Drew Hawker, Mason Duke and Collin Walker were the four Jaguar batters to reach base safely in the game. Joseph McCormick and Williamson led the way for Oak Mountain with two hits apiece.