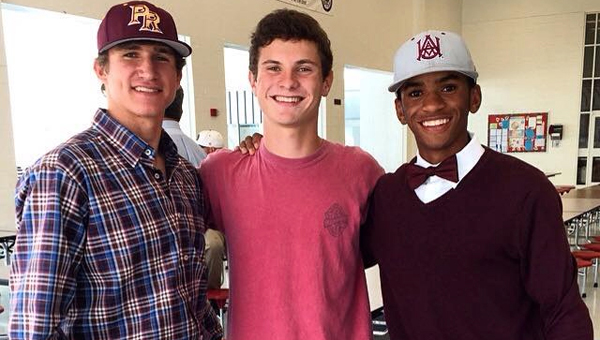 NORTH SHELBY – The Oak Mountain baseball squad may have not have made the 7A playoffs this season, one of the pitfalls of being located in the best area and region in the state, but the Eagles still have reason to celebrate. Two of their own will continue their playing careers at the next level. Brandon Whitaker and Graham Hackbarth, two of the main senior contributors for the Eagles over the last couple of years, will play for Alabama A&M and Pearl River Community College, respectively. Oak Mountain head coach Brian Breeze had nothing but positive things to say about his two seniors.

“One thing about Graham is he’s a versatile player,” Breeze said. “He’s played every position for us. Wherever we needed Graham, he was like, ‘hey I’ll play it’.”

Hackbarth will be a legacy at Pearl River Community. His father played football there, “way back when,” according to Hackbarth, and he is hoping to use Pearl River as a springboard to a bigger school, with the hope of being drafted down the line.

Whitaker on the other hand has led the way for the Eagles from the plate. With a .340 batting average, to the best of Breeze’s recollection, Whitaker is a workhorse.

“He works,” Breeze said. “He just works at his craft. His mentality is, ‘I’m gonna hit extra every day regardless of whether I’m hitting good or bad.”

Whitaker will attend Alabama A&M where he will study engineering in concert with playing baseball.

The two have had aspirations of playing in college since they were freshman.

“That (playing in college) was the goal since we were freshman,” Whitaker said. “When you see guys actually get signed (it makes you want to be signed).”

“That’s true,” Hackbarth responded. “It’s always in your mind, like, you want to play. But whenever you see guys actually getting signed it makes you want to do it more.”

Hackbarth and Whitaker ended their high school careers on a high note, beating 7A foe Spain Park at home on April 20 4-0 to bring their record to 18-15-1. The two will look to contribute right away to their respective collegiate rosters.

The Helena Huskies baseball team defeated the Sylacauga Aggies 5-4 on Monday, April 20, to advance to the second round... read more