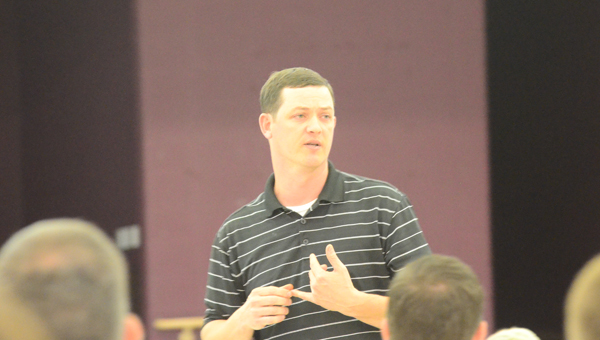 ALABASTER – On Tuesday, April 21 Phillip Lawson was introduced to the Thompson Middle School boosters as the new head coach of the middle school football team.

Lawson, who played a year of football for the University of Kentucky in college, spent the previous six years at Pelham High School as the offensive coordinator before coming to join the Thompson family, on the heels of new high school head coach Mark Freeman, who joined the Warriors in December of the previous year. Both coaches spoke to the kind of program they want to develop at Thompson.

“At the high school level, we will be good off desire, pride and heart,” Freeman said during the booster club meeting. “We’re nowhere near where these other schools are in the weight room. We’re 18 months away. At this (middle school) level, I’d want my son to play for him (Lawson). He will bring these kids along and love on them.”

“We’re going to have fun,” Lawson said in his first address to the parents and school administrators gathered.

However, Lawson’s focus will not just be about having a good time, or even solely about football. Lawson’s mantra was clear from the opening moments of his speech.

“Grades, character and citizenship,” Lawson said. Lawson went on to say he played a year at Kentucky, but was on a full academic scholarship and played four sports in high school. “It can be done,” he said.

In regards to his second prong on his trident-approach, Lawson had this to say. “Your sons will be treated with respect,” he said. “There will be no vulgarity coming out of your coaches mouths or your sons mouths.”

As for citizenship, Lawson understands the microscope that athletes live under.

“They’re going to be role models within the school,” he said. “When you’re an athlete you have an extra burden on your shoulders.”

The Thompson program may need some time to be competitive at the high school level, but it is coaches like Lawson who will be responsible for grooming the athletes who will soon take the field for the high school Warriors.