HOOVER—A Birmingham woman was arrested on charges of felony exploitation of an elderly person after allegedly stealing nearly $2,000 from a 95-year-old man. 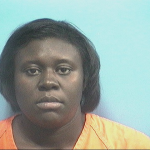 Benques Renett Lofton, 25, was arrested by the Hoover Police Department and placed in the Shelby County Jail on April 10. She was released after posting a $15,000 bond the same day.

According to the arrest warrant, Lofton “intentionally and knowingly committed financial exploitation of an elderly person” in March 2014, when she allegedly stole and cashed two checks totaling $1,750 from a 95-year-old man.

“The suspect, Benques Renett Lofton, was an employee of Danberry at Inverness retirement home,” Hoover Police Capt. Gregg Rector wrote in an email.

In addition, the victim’s debit card was stolen and used to make nearly $4,000 in purchases, Rector said.

“There were two additional suspects on the stolen debit card purchases and we were never able to identify them,” Rector wrote.

Warrants for Lofton’s arrest were issued in both Jefferson and Shelby counties. She was arrested in Jefferson County on Sept. 14, 2014 and posted bail the same day. A warrant for her arrest was issued in Shelby County on Sept. 19, 2014, and she “remained at-large” until her April 10 arrest, Rector said.

In Shelby County, Lofton is facing the Class C felony charge of financial exploitation of an elderly person. If found guilty, Lofton could face up to 10 years in prison. She is scheduled for a preliminary hearing on April 29 at 8:30 a.m.

By NEAL WAGNER / Managing Editor PELHAM – A 33-year-old Pelham man is facing up to life in prison after... read more