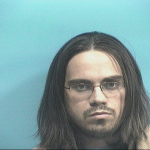 The Shelby County Drug Enforcement Task Force arrested Hunter Matthew Phelps, who lists an address on Shelby County 42 in Calera, on April 21 and charged him with three counts of unlawful distribution of a controlled substance.

Unlawful distribution of a controlled substance is a Class B felony, and is punishable by up to 20 years in prison per count upon conviction, according to Alabama law.

Phelps was released from the Shelby County Jail on bonds totaling $45,000 the same day he was arrested.

He is scheduled to appear in Shelby County Circuit Court on May 20 for a preliminary hearing.