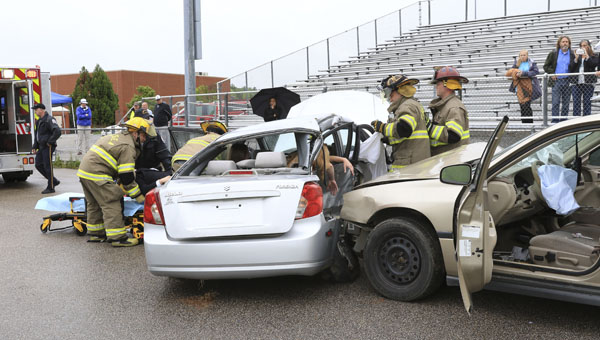 Emergency responders extract Chelsea High School students from the scene of a simulated car crash during the Every 15 Minutes program on April 16 at the school. (Contributed/Dawn Harrison)

CHELSEA – Students at Chelsea High School saw how their lives could change in an instant from distracted and impaired driving as they participated in the Every 15 Minutes Program on April 16 and 17.

During the two-day program, CHHS juniors and seniors played roles in a simulated car crash involving a drunk driver and in the events following the crash, including medical treatment, a mock funeral for two students and a trial for the drunk driver.

“We wanted to do more than just a basic wreck scene,” Chelsea Fire Chief Wayne Shirley said. “A lot of people put a lot of work into this, but if we can make a difference in a young person’s life, it’s worth it.”

The program’s name is based on the statistic that every 15 minutes, someone dies in an alcohol- or drug-related accident, Shirley said.

Chelsea Fire and Rescue and the Shelby County Sheriff’s Office coordinated the simulated wreck scene at the school.

CHHS students Justin Abercrombie and Suzy Walton played the roles of two students that died after the wreck.

“It seemed very real,” Abercrombie said. “This whole experience has been great.”

Abercrombie and Walton were sequestered from their classmates the day after the wreck and, after the Sheriff’s Office chaplain read their obituaries, they read letters they wrote to their parents from the sound booth in the CHHS auditorium during the mock funeral.

Then, the students’ mothers read letters to their children.

“It was really hard,” Walton said of hearing her mom’s letter. “We got to feel what they were feeling about our death. Hearing her say what she would do if she had more time with me … that hurt.”

The program also carried the weight of a real tragedy that shook the community nearly nine years ago.

Julie Yeager spoke to students about her daughter Hannah, who died in a car wreck in 2006 when she was a freshman at CHHS.

“I didn’t get to see my daughter go to a prom, and there are many things that I will never experience with her,” Yeager said. “My hope is that you will all be safe this weekend, as always, and I hope you’ll continue to make great memories with your friends and family.”

Shelby County Sheriff John Samaniego asked students to think before they act and consider the consequences surrounding their actions.

“Unfortunately, during my career, I’ve had to deal with this in real life, and just listening to this part of the exercise drew a lot of emotion out of me,” Samaniego said. “God put us on this earth with freedom of choice. Your parents have worked hard to prepare you, but now it’s on you to make those choices.”

The program at CHHS takes place every two years.

CHHS students filmed each part of the program to compile into a video, which all juniors and seniors will watch at school.