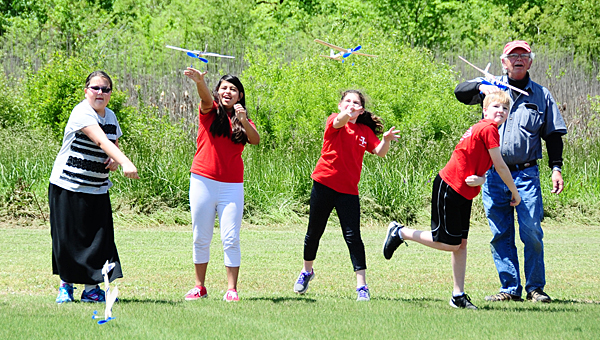 ALABASTER – Thompson Intermediate School gifted student Nik Janikowski was having a hard time with the high winds at Alabaster’s Limestone Park on April 22.

“I threw it, it stalled, it crashed and the pieces fell off,” Janikowski said as he held a tattered-looking rubber band-powered small wooden plane. “I’m having some good progress. If the wind works with me, I’ll have good progress.”

After taking his small model plane to a member of the Alabaster Radio Control Association standing a few feet away, Janikowski’s aircraft was back in business, and he quickly joined his classmates in tossing the planes into the air.

April 22 marked the culmination of a partnership between the TIS gifted education department and the ARCA, which operates a model airplane runway at Limestone Park.

Several months ago, ARCA members visited the school to teach students the basics of aircraft operation. The students then used model plane flight simulator software – complete with the actual remotes used by the ARCA – to train before taking a trip to the organization’s runway from April 21-23.

TIS gifted education teacher Rita Sparks praised the partnership between the school and ARCA, which dates back 10 years.

“It’s important for our students, because this is information and an experience they would otherwise not be exposed to,” Sparks said, noting the partnership strengthens the students, math, science, technology and engineering skills.

Before taking the reins of an actual remote-controlled plane, gifted students Cohen Russell, Cameron Foust and Ryan Furlong said they were glad they had previous experience on the simulator software.

“You don’t have to worry about crashing it in real life,” Russell said.

“When you crash in the simulator, you don’t say, ‘Darn, there goes my college fund,’” Foust added.