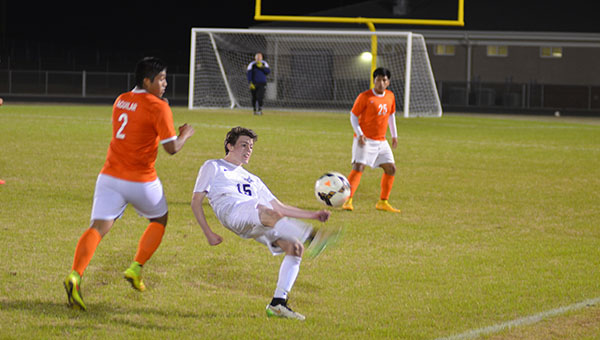 The Helena Huskies became the Class 5A Area 7 champions and will take on Ramsey in the first round of the playoffs on April 25. (File)

HELENA–The Helena High School boys Soccer team hit the field as a program for the first time ever in 2015 and despite a very wet spring and inexperience playing together, Helena became the Class 5A Area 7 champions after defeating Montevallo 9-0 on April 17.

The trend continues for the majority of the HHS athletic teams as the boys soccer team is one of many Helena teams that made the playoffs in their first year as programs.

Helena head coach Zach Morgan described the season as “weird and wacky” with the unusual amounts of heavy rain, rescheduling and having to find the right location for practices.

“I have never seen the weather like this,” said Morgan. “A lot of times we would try and practice in the gym but it gets tough trying to practice with all the other teams needing the space as well.”

Helena prepared for matches in a variety of ways when they couldn’t practice on the field that included using the gym, workouts, team meetings talking about formations and more.

“Being a first year school I stepped into something where I didn’t know the talent level,” said Morgan. “Our first goal was to be competitive and once you’ve determined that you can kind of go from there. We wanted to get to the playoffs and then we achieved that and then became the area champs. Our goals just got bigger and bigger and now we’ve seen how well we can play and we definitely want more.”

Helena will face Ramsey in the first round of the playoffs on Saturday, April 25, at 7 p.m. at Helena High School.

Helena’s record heading into the playoffs is 11-7-3. Helena finished with a perfect record against area opponents.

The Helena Huskies baseball team defeated the Sylacauga Aggies 5-4 on Monday, April 20, to advance to the second round... read more