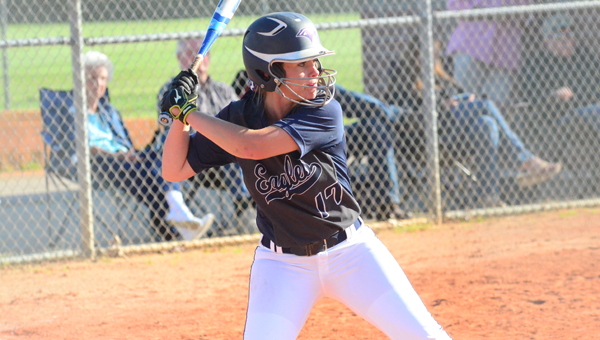 McKenzie Ridgway had one of four hits on the day for the Lady Eagles as they scraped past Chelsea 1-0 on April 21. (Reporter Photo / Baker Ellis)

HOOVER – In the Oak Mountain Lady Eagles’ second-to-last regular season softball game of the year, they defeated a talented 6A Chelsea squad in a low-scoring contest, 1-0.

Each team only used one pitcher, and both pitched exceptionally well. Ashlee Sanders took the mound for Oak Mountain and threw a complete seven innings. She hurled 98 pitches, gave up just four hits, no runs and struck out four on the day. Her counterpart, Sara Cespedes, threw a prodigious 132 pitches over 6.2 innings, giving up just four hits in the process and striking out five, however Cespedes also walked nine batters, which added to her high pitch count.

Only one base runner advanced to third base in the first six innings of the contest, which happened when Sara Gallman drew a leadoff walk for Oak Mountain in the bottom of the third inning and advanced to third base when O’Neil Roberson was hit by a pitch and Madeline Porter was walked as well to load the bases. The Lady Eagles could not take advantage of the opportunity however, allowing Cespedes and Chelsea to escape the jam unscathed.

As the game moved into the seventh inning and there was still no score, the pitch count undoubtedly began to wear on Cespedes. After Sanders burned through the first three Chelsea batters in the top of the seventh, the Lady Eagles finally broke the stalemate in the bottom of the inning.

Maddie Katona, the leadoff hitter, laid down a bunt on the fourth pitch of her at-bat and reached first base to start the inning on a positive note. After Sanders lined out to Alex Smithon at shortstop, Katona was picked off at first base to seemingly provide a momentum shift in the direction of the Lady Hornets.

However, Gallman, Carmyn Greenwood and Roberson, the next three Oak Mountain batters, all drew two-out walks to load the bases. With the bases loaded and a 1-1 count, Porter smacked a walk-off single into right field, scoring Gallman and winning the game in the process.