Pelham back strong after two-week break 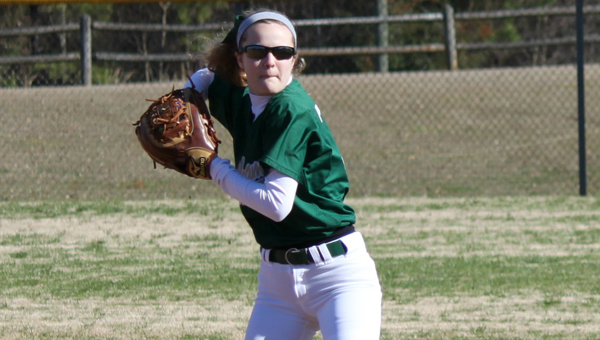 Hannah Pritchett and the Pelham Lady Panthers defeated Clay-Chalkville on April 21 by a score of 5-2. (Contributed)

PELHAM – The last time the Lady Panthers’ softball team took the field was April 9 when they defeated Hueytown 5-4. The next three games scheduled for Pelham were all cancelled, and the Lady Panthers’ found themselves with a long layoff in between games. When they finally took the field again on April 21 in the last game of the regular season, Pelham had no problem shaking off the rust of their unexpected sabbatical, and beat Clay-Chalkville 5-2 to move to 14-3 on the year.

Cadence Crocker was credited with all seven innings of work for Pelham. She threw 107 pitches, allowed seven hits and struck out five on the day. The Lady Panthers struck first in the bottom of the second inning to claim the lead, which they never relinquished. Carly Edinger, the leadoff batter for Pelham in the bottom of the second, was hit by a pitch and Crocker was promptly walked directly after to put base runners on first and second early in the inning. Morgan Carter singled two batters later, which was enough to score Edinger from second. Lexi Johnson, a pinch runner for Crocker, and Carter later scored in the inning as well to give Pelham an early 3-0 lead.

Two more runs for the Lady Panthers in the bottom of the fourth was enough to keep the visitors at bay, and Pelham walked away with a 5-2 victory and will now focus on preparing for postseason play.

No batter had more than one hit for Pelham on the day. Sawyer Martin, Dalton Merrill, Maddie Walker, Edinger, Steeley Martin and Carter each registered a hit, giving Pelham six total for the day.

McKenzie Ridgway had one of four hits on the day for the Lady Eagles as they scraped past Chelsea 1-0... read more