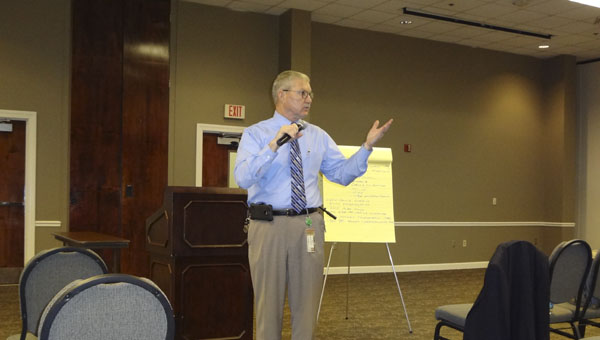 Mayor Gary Waters led the meeting at the Pelham Civic Complex and invited people to share information about ongoing projects and upcoming events throughout the city.

Paula Holly, the city’s executive administrative assistant, said this year’s Pelham Palooza event will be held July 17 and 18 at the civic complex.

The event will feature live music and bands. Sponsorships are still available.

City Council President Rick Hayes said although no commitments could be made at this point, officials hope the widening of Shelby County 52 to four lanes between Interstate 65 and U.S. 31 will be ready for construction during summer 2016.

Hayes also mentioned everyone involved is also working diligently to address the congestion on Alabama 261.

In 2012, the Alabama Department of Transportation completed the resurfacing of Alabama 261 in Pelham and Helena. However, the widening of this road to five lanes has been delayed a number of times over the last 20 years.

“We certainly understand that traffic is a key issue for our city and the entire region,” Hayes said. “We are working with our neighbors and the state to address this issue in every way possible.”

Pelham Board of Education President Rick Rhoades talked about school upgrades and construction as the end of the current academic year approaches.

Crews have begun clearing land at the site of the new Applegate Elementary School off Applegate Parkway near Pelham Fire Station No. 3.

Applegate Elementary is a part of a $50 million building program for Pelham City Schools.

“This has been a very, very busy time for us,” Rhoades said. “We’re excited about our future and where we think we can go, and how we can get there.”

Police Chief Larry Palmer addressed a national conversation about police officers’ use of force while on duty.

“We don’t have this issue in Pelham, and I hope we won’t,” Palmer said. “We have a very professional team. We have very strict rules we go by.”

“What I need you to do is be observant,” Palmer said. “This is your police department. If you need us we’re there.”

“We did this five years ago,” Ray said.

“We would come together and pick a week to promote ‘buy local’ in our city,” Smith said. “The mentality is everything is either in Alabaster or Hoover, but there are businesses in Pelham. The community is what we’ve got to reach.”