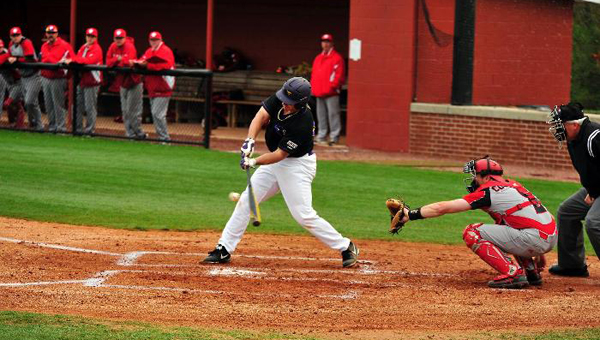 LIVINGSTON – University of Montevallo senior Vinny Rodriguez extended his record-breaking hitting streak in the Falcons’ 8-3 loss on the road at nationally-ranked University of West Alabama in non-conference play April 21.

Rodriguez, who went 1-for-4 at the plate and drove in the lone run for the Falcons, has now recorded a hit in 25 consecutive games to extend his streak that set a new program record.

Junior Steven Knudson led Montevallo (20-23) offensively as he finished 2-for-4 at the plate with a double and scored one run against the Tigers, who are ranked No. 10 nationally in the Collegiate Baseball Newspaper NCAA Division II poll.

The Falcons will host West Alabama in their final non-conference contest of the season Wednesday, April 22 at Kermit A. Johnson Field. First pitch is set for 6 p.m.

Sophomore Joey Hume (1-4) was tagged with the loss after allowing four earned runs on eight hits with two strikeouts and one walk in 4 2/3 innings on the mound in his first start of the season.

Montevallo plated its lone run in the top of the first inning and took a 1-0 lead when Knudson doubled to left field before scoring on a RBI single by Rodriguez.

Tanner Rainey blasted a three-run shot in the bottom of the eighth inning to push the Tigers’ lead to 7-1 before Bolte, who singled after the homer, scored later in the frame on a bases-loaded walk to account for their final run.

The Helena Huskies became the Class 5A Area 7 champions and will take on Ramsey in the first round of... read more