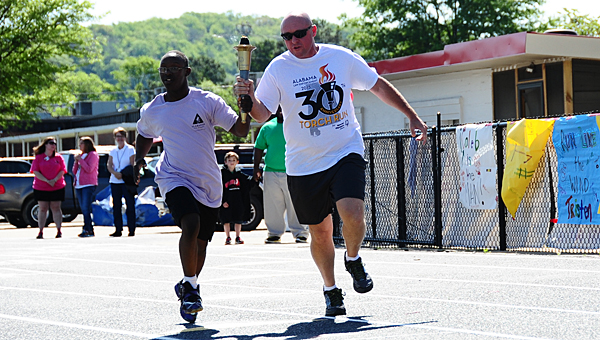 “I’m going to have to run just a little bit faster,” Stansell said when asked about besting his competition. “It’s not speed that wins races, it’s skill.”

Stansell was among dozens of special-needs athletes from the Pelham and Alabaster city school systems to gather at Alabaster’s Larry Simmons Stadium on April 22 for the school systems’ first joint Special Olympics competition.

The athletes had plenty of support at the event, as parents, hundreds of students, Pelham and Thompson football and volleyball players, teachers and Junior ROTC members cheered them on.

Pelham police officer Mike Williams and Thompson High School senior Special Olympics athlete Austin Greathouse kicked off the event by running a torch into the stadium a few minutes after each group of athletes sprinted through an inflatable tunnel to a chorus of cheers and applause.

“This is what makes Alabaster a wonderful place,” Alabaster School Superintendent Dr. Wayne Vickers said. “It’s obvious that as a city and as a community, we care about our children.”

For Riverchase Middle School student Jorean Henderson and his Special Olympics teammates, the day got off to an energetic start. As the athletes were boarding their bus to travel to Alabaster, all of the RMS students lined the hallways to cheer them on.

“It was kind of nice. It got me pumped,” Henderson said as he was preparing to compete in multiple running and throwing events. “I want to win.”

Inverness resident Dustin Chandler, who is working to bring an all-inclusive playground to Pelham in honor of his special-needs daughter, Carly, served as the emcee of the event.

“What a great day God has given us for these events,” Chandler said. “We all believe that the world will be a better place if we work together to achieve it.”

McKenzie Ridgway had one of four hits on the day for the Lady Eagles as they scraped past Chelsea 1-0... read more