Harper “excited” to get to Air Force Academy 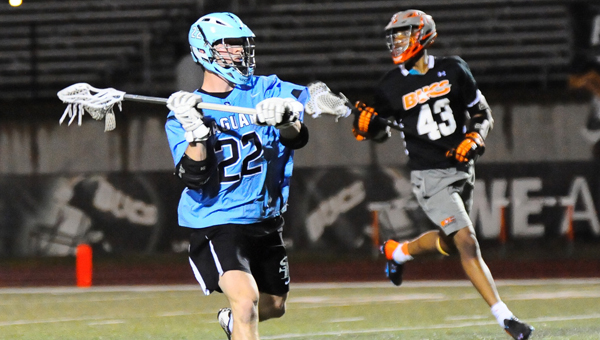 Trent Harper, a senior on the Spain Park lacrosse team, has committed to attend the Air Force Academy where he will play lacrosse. (Contributed / Ted Melton at smugmug.actionsportspix.com)

HOOVER – Trent Harper has been committed to the Air Force Academy for almost a calendar year. The Spain Park senior is “the best player in the state,” according to his high school coach Dan Jordan, and plays midfield for the Jaguars’ 15-1, No. 1 ranked lacrosse team. He hopes to be an immediate contributor for the Falcons’ squad that was ranked 38th in the nation in Division I as of April 21. He has known for a long time he wanted to play lacrosse in college, and when the Air Force Academy approached him, his decision was easy.

“I was getting looked at by a bunch of smaller D1 schools last May,” Harper said. “And Air Force contacted me, and last year they were a top-10 team, so I was already pretty interested in them. I went and visited them, and the campus is incredible, and the school is incredible. I made the decision right after I visited.”

Students who attend one of the nations military academies are the best and brightest in the country, and Harper is no exception. His ability on the field and his 4.1 GPA are testaments to that. Harper’s choice to attend the Air Force Academy or play a high-level NCAA Division I sport alone would alter his college experience from the vast majority of his peers, and certainly the two in tandem will create a landscape both challenging and rewarding, which Harper is looking forward to.

Before Harper can turn his attention fully to his college endeavors, there is one piece of unfinished business he hopes to attend to first. His Jaguar squad has not won a state tournament since his freshman season, and he is hoping to remedy that before launching into his next stage of life.

Harper will report to school on June 25 for basic training, and will have his first collegiate practice on July 4.