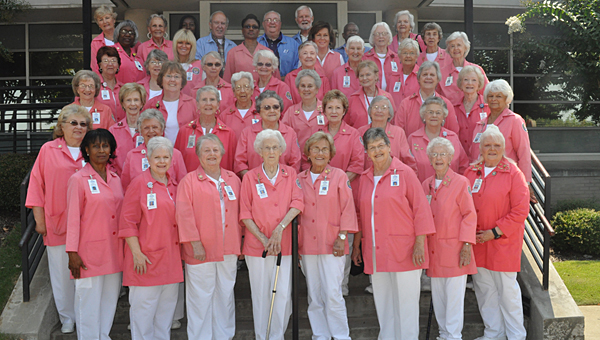 ALABASTER—A tragedy first brought Peggy Wert to Shelby Baptist Medical Center, but an appreciation for the hospital has kept her coming back every Tuesday for 25 years as a volunteer.

In 1977, Wert’s daughter was struck by lightning while riding her horse. The bolt killed the horse and caused her daughter’s heart to stop. Once found, her daughter was rushed to Shelby Baptist Medical Center where her heart was restarted, but due to brain stem damage she lived only in a vegetative state until she passed away nine years later.

Wert’s daughter spent two months at Shelby Baptist Medical Center before being transferred to a different hospital, and those two months made a lasting impression on her mother.

“Everybody was just so wonderful to her and so kind. I thought, ‘If I ever have a chance to volunteer, I want to go to Shelby.’ I love Shelby, and that is why I am here,” Wert said.

Peggy Wert is one of 77 adult and eight youth volunteers who have collectively donated 19,255 hours of service in the last year to the hospital, approximately $426,103 in goods and service, according to Lisa Driver, manager of volunteer services and the hospital’s gift shops.

“They provide that extra service that we could just not provide without them,” Driver said.

The volunteers are known as the “pink ladies and a few good men in blue” for their pink and blue jackets, and the volunteers provide a variety of services for the hospital including pointing visitors in the right direction, serving as hostess-liaisons in most of the waiting rooms, and sewing pillows for the heart patients.

“They really provide that extra comfort for our families,” Driver said.

Mildred Benton, who has volunteered more than 13,000 hours during her 20 years as a “pink lady,” first came to Shelby Baptist Medical Center when her husband was diagnosed with colon cancer in 1992. A year after he passed away from the disease, Benton began volunteering.

For Benton, volunteering is a chance to get out of the house and give back to the hospital.

“I live by myself, and (volunteering) gives me an opportunity to get out of the house,” Benton said. “I enjoy being with other people and helping other people.”

For more information on serving as a volunteer at Shelby Baptist Medical Center, call Lisa Driver at 620-8065.

By NEAL WAGNER / Managing Editor ALABASTER – A 37-year-old Alabaster man is facing up to life in prison after... read more