Blast from the past: OMIS students visit with Union soldier 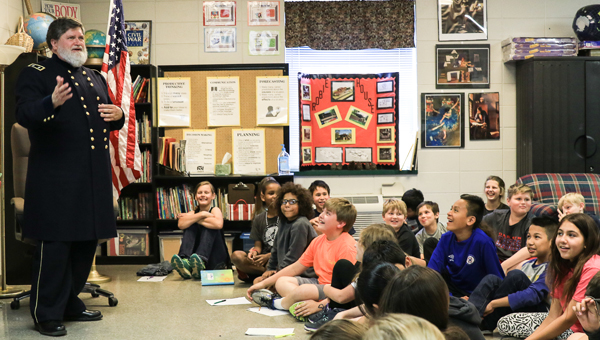 NORTH SHELBY—Students at Oak Mountain Intermediate School met a special guest on April 22, one from 145 years in the past.

As Thomas, Allen told humorous stories about his messy West Point roommate, William Tecumseh Sherman, and classmate Ulysses S. Grant. He also recounted serious matters, such as slavery, noting that in pre-Civil War Alabama, nearly half of the population was in “involuntary servitude.”

“I’m hoping (Allen’s visit) makes history come alive,” OMIS GRC teacher Ashley Richardson said, noting the fifth graders are about to begin a unit on the Civil War. “When they open their textbooks and research… they will be not only words on the paper, he’s making them come alive.”

Allen also recounted the story of Thomas’ own life before, during and after the Civil War.

Born in 1816 to a Virginia slaveholding family, Thomas was raised to view slavery as a “benevolent institution,” Allen explained. However, after witnessing the valiant effort of Maj. Gen. James Steedman’s “colored troops” in the Battle of Nashville, Thomas changed his mind.

“They were brave, they were gallant, they were tenacious. At that point (in 1864), I changed my mind,” Allen, as Thomas, said.

Following the Civil War, Thomas commanded troops in the south during Reconstruction and staunchly opposed groups such as the Ku Klux Klan.

Allen said he hoped Thomas’ story would show students that “on a general basis, people can change.”

“Thomas goes from a slaveholding family with racist ideas, and then he becomes an advocate for Civil Rights,” Allen said.

“This is a way to segue into the Civil War (unit),” Richardson said.