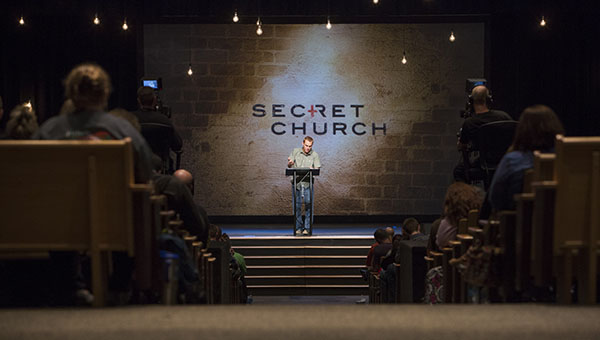 The Church at Brook Hills received a security threat hours before the church was set to host the religious gathering Secret Church on Friday, April 24. (File)

NORTH SHELBY–Hours before the Church at Brook Hills was set to host the much-anticipated Secret Church gathering, the church received a security threat that caused leaders of the church to close the church for the scheduled 6 p.m. simulcast showing of the gathering.

Despite the threat, the simulcast will still take place, just not at the Brook Hills location.

Church at Brook Hills communications director Chris Kinsley said the church received the threat a little before 10 a.m. on Friday, April 24 that caused a full evacuation of the building.

“We live in world where Christians are on a constant threat around the world, and thankfully it seems like this threat hasn’t turned into anything,” said Kinsley. “We wanted to be prudent and take into account other peoples’ safety. We have an early learning center that meets during the week also, and that was another concern we had.”

Law enforcement officials arrived at the church and concluded a thorough sweep. Nothing was found and an all-clear was given for the building.

“We have contacted current ticket holders and given them information on new locations where they can view the simulcast that is still set to take place at 6 p.m.,” said Kinsley.

The simulcast will include Pastor David Platt and is set to stream in places all across the United States and various parts of the world for viewers.

More information about the church and information regarding tonight’s simulcast can be found at Facebook.com/Brookhills.

Lilly honored as Educational Support Personnel of the Year