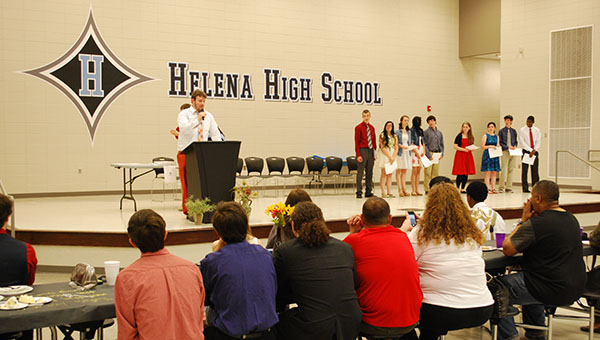 HELENA–Helena High School theater and art students, parents and faculty packed out the school cafeteria on Thursday, April 23, for the first ever “Evening with the Stars.”

Guests were treated with a catered dinner while awards were presented to the theater students and honors art students.

Jefferson Casey, theater teacher and thespian troupe director at HHS, is in his first year at the school and helped start the HHS theater program.

“The whole emphasis on tonight was to celebrate the many accomplishments that the arts and the theater and thespian students have had this year,” said Casey. “I feel like it happens everywhere, but there’s a lot of emphasis on sports and how the sports teams do, and it’s important they do. But we don’t have as many competitions or anything so it’s kind of hard so I really wanted to have a chance to celebrate all the good, hard work they’ve done.”

Students were nominated for awards in different categories and when the winner’s name was called, they perform a skit they had done in a previous play or Trumbauer competition.

Casey said the number of students who qualified for state was impressive, and one of his favorite parts of his job is to watch students grow.

“My favorite part of my job is watching people come to me with little to no idea of how to approach a character or take on a scene and by the end of the year they’re doing it fluently as if its second nature to them,” said Casey. “I love seeing them stretch and grow and learn what they’re able to do physically as well as verbally through practice.”

Helena High School Principal Jay Peoples addresses members of the Shelby County Board of Education after he was appointed to... read more