‘We never felt like we were in danger:’ TMS group forced to evacuate Liberty Island 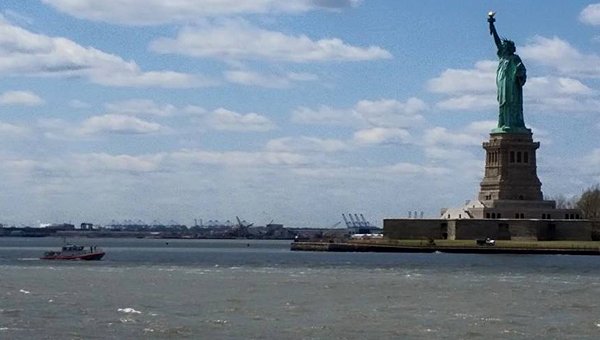 Thompson Middle School parent Leigh Williams took this photo as she and a group of students and parents from the school were evacuating Liberty Island following a bomb threat on April 24. The group is safe, and will return to Alabama on April 25. (Contributed)

NEW YORK – A group of about 65 students and parents from Thompson Middle School are safe after a bomb threat forced the evacuation of Liberty Island in New York City on April 24.

The TMS group, which included about 40 eighth-grade students, was in New York City on a school trip when the NYPD bomb squad evacuated and examined the island at about noon, Christine Baggette, who was on the trip with her daughter, said in a phone interview.

“We never really felt threatened. We never felt like we were in danger,” Baggette said at about 10:30 p.m. “Everybody seemed to be organized. The kids were safe and everyone was together.”

Baggette said the Alabaster group was on the pedestal level of the Statue of Liberty when NYPD officers and park rangers moved the group to a lower-level observation deck as a precaution after a 911 caller allegedly threatened to blow up the statue. The NYPD eventually declared the bomb threat was false a few hours later.

After the group was moved to another area farther away from the statue, authorities announced they were carrying out an emergency evacuation of Liberty Island.

Leigh Williams, who was also on the trip with her eighth-grade daughter, said authorities announced an emergency evacuation of the island at about noon.

Baggette and her daughter were among the first passengers on the island to board one of the ferries sent to evacuate the visitors, but some members of the Alabaster group, including Williams, did not get out as quickly.

Because several members of the group had placed their belongings in lockers when they arrived on the island, they were delayed when they tried to retrieve their items before evacuating. According to Williams, the bomb squad’s search focused heavily on the area near the lockers.

Baggette said Williams and about 20 other students and parents did not get back to New York City until about six hours after the evacuation began, and were stuck on a ferry circling Liberty Island for an extended period of time.

Those in the group who had items in the lockers had not gotten them back as of April 24, but were scheduled to return to Liberty Island the next day to retrieve them before boarding their flights back to Alabama.

“We are supposed to fly out tomorrow and TSA is pretty touchy about not having ID, which a lot of us left in our bags,” Williams wrote. “So they agreed to take us back and claim our bags.”

The TMS students and parents who got delayed during the evacuation and did not get to visit the 9/11 Memorial Museum and other attractions on April 24 were scheduled to visit them on April 25, Baggette said.

The TMS group is scheduled to arrive at the Birmingham-Shuttlesworth International Airport on two separate flights between 10 p.m.-11 p.m. on April 25.

“Our tour guide had been a tour guide for years, and they had never seen that happen before,” Baggette said of the evacuation. “Of all the days we picked to tour the Statue of Liberty.”

Kaitlyn Willis makes a move during Chelsea’s 6-1 loss to John Carroll Catholic in the first round of the 6A... read more