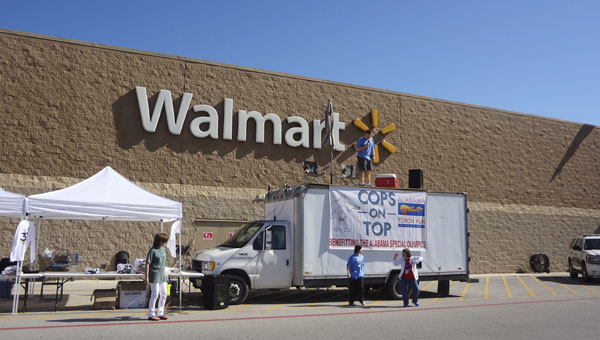 The Cops on Top fundraiser for Special Olympics continues Saturday, April 25 at Walmart off U.S. 31 in Pelham. (Reporter Photo/Emily Sparacino)

PELHAM – Beth Olive’s plastic bucket was nearly overflowing with donations in the first hour she and her mother stood outside of Walmart during a fundraiser for Special Olympics on April 24.

“It’s your million-dollar smile, girlfriend,” Betty Montgomery said to Olive, who was wearing five gold medals she won at the first national Special Olympic games in 2006.

Olive and her mother, Kathy, were among nearly a dozen volunteers stationed in front of Walmart off U.S. 31 in Pelham on April 24 for “Cops on Top,” an annual fundraiser Shelby County law enforcement agencies hold for Special Olympics.

As volunteers stand ready at the doors, Shelby County Sheriff’s Office and Pelham Police Department officers take turns standing on top of a truck and using a microphone to talk to patrons about the fundraiser as they approach the store.

“This is our seventh year,” said Debbie Sumrall, a Shelby County Sheriff’s Office deputy in community outreach. “We have athletes and volunteers at the door that engage people. It’s hard for people to say no to our athletes. They do a wonderful job collecting donations.”

The fundraiser will continue all day April 25 if the weather permits.

“This year is the 30th anniversary of the Torch Run,” she said. The fundraising goal for this weekend’s event is $10,000.

“It all stays in Alabama for our Alabama athletes,” Sumrall said, noting funds collected go toward sending athletes to national and international competitions. “The more money we raise, the more people we can send.”

Beth Olive, 27, and her friend and fellow Olympian Erica Watts, 27, have been competing in Special Olympics for about 20 years.

They both compete in rhythmic gymnastics.

Erica’s mother, Sandi, and Montgomery and her son, who is a Special Olympian, were helping collect donations at the fundraiser, too.

Sumrall said donations at Cops on Top can be made with cash, credit cards and checks.

“People are cheering for them (and) applauding them,” she said. “They just don’t get that in their everyday lives. Our athletes are amazing.”

‘We never felt like we were in danger:’ TMS group forced to evacuate Liberty Island

Thompson Middle School parent Leigh Williams took this photo as she and a group of students and parents from the... read more