Briarwood splits first two games with Homewood in 6A playoffs 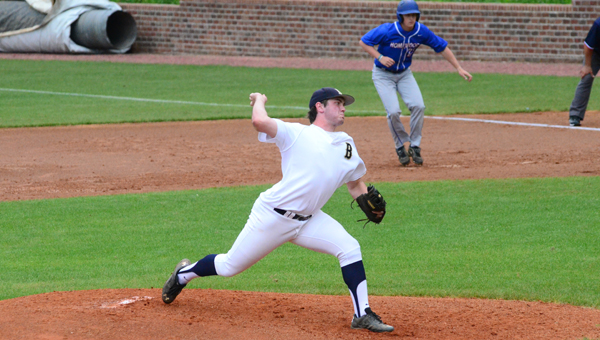 Carson Cupo of Briarwood throws a pitch in the first game of the second round, 6A playoff series between Briarwood and Homewood. The series is currently tied, with the decisive game three being played on Monday, April 27, at 6:30 p.m. (Reporter Photo / Baker Ellis)

NORTH SHELBY – Briarwood, ranked fifth in class 6A and winners of Area 9, are in the midst of a second-round playoff series with familiar foe and Area 9 resident Homewood. Homewood defeated Area 10 winner Pell City in three games to advance to the second round and set up a series with a Briarwood squad that beat them twice in the regular season. The Lions beat county opponent Chelsea in two games by a combined scored of 16-6 to advance to the second round.

On the first night of the second round series on April 24, Briarwood won the first game 6-3, but Homewood battled back in the second game to stave off elimination and won 6-1, forcing a game three. Game three was scheduled for April 25, however rain and inclement weather forced the game to be rescheduled for Monday, April 26.

In the first game, Carson Cupo started on the mound for the Lions and threw six innings before being relieved by Sam Strickland. Cupo threw 86 pitches, gave up eight hits and three runs, struck out four and gave up one home run in the win. Briarwood was, however, on the wrong side of the scoreboard in the bottom of the sixth inning. Down 3-2, the Lions ripped off four runs, capped by a Luis Fuentes two-out bomb to right field, to take a commanding 6-3 lead and get the win.

In the second game, played immediately after the first, Homewood finally stole a win away from the Lions squad they had been unable to beat this year before this night. The Briarwood bats went silent against Adam Stewart, who threw a complete game for Homewood and gave up only one hit. Trey Mitchell, Grant Shotnik and Ross Thompson all took the mound for Briarwood. Mitchell and Shotnik both gave up three runs, which came in the second and third innings and allowed Homewood to build an insurmountable early advantage. The Lions never found any offensive rhythm, and fell 6-1.

The third and final game of the series will be played on Monday, April 26 at 6:30 at Jay D. Kynerd Field, located at Briarwood High School.

Jonathan Crawford takes a cut at a pitch in the opening game of the series between Thompson and Mountain Brook.... read more