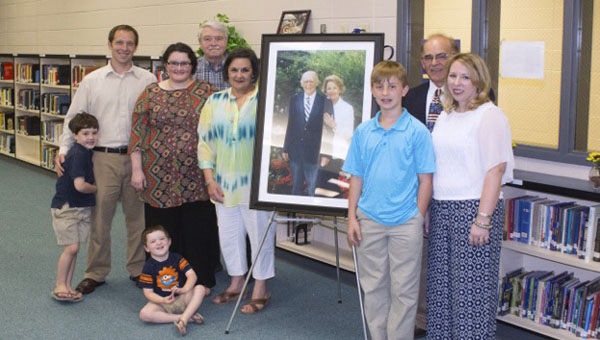 The library at Chelsea High School is now known as the Col. and Mrs. John Ritchie Learning Commons in honor of a former teacher and his wife. The couple’s son, Frank Ritchie, second from right, is a math teacher at CHHS. (Contributed)

The library, now known as the Col. and Mrs. John Ritchie Learning Commons, pays tribute to Frank Ritchie’s parents, who had a significant impact on the school and community during their lives.

“They both did a lot for the town and for the school,” CHHS Principal Wayne Trucks said. “We thought it would be appropriate to name the media center after (them).”

Col. John Ritchie taught math for many years in Chelsea, overlapping with his son for six years before retiring.

Frank Ritchie remembers when the school’s math department consisted only of him and his father.

“When I started teaching, we were the high school math department,” he said. “Dad always said teaching was the best job he ever had. I wish I was just half as good as he was.”

Trucks described Col. John Ritchie as “one of the founding fathers of the city of Chelsea,” having served on the first city council and helping establish the city’s public library.

School and city officials, along with Frank Ritchie and family members, attended a dedication ceremony at the library April 9.

“It meant a lot that we were doing it,” Frank Ritchie said of the dedication. “It’s quite exciting.”