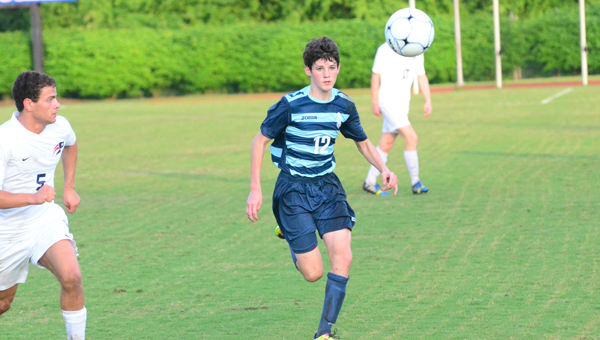 The Briarwood Christian Lions fell 7-1 in the first round of the 6A state tournament on April 25 at the hands of the Homewood Patriots. (Reporter Photo / Baker Ellis)

HOMEWOOD – On April 25, 6A Area 10 runner up Briarwood traveled only about 20 minutes north on Interstate 65 to challenge 6A Area 9 champion Homewood in the opening round of the 6A state tournament. This was the first time the schools had played all season, and the result did not end well for the visiting Lions, as they lost in ugly fashion, 7-1.

The Lions qualified for the state tournament after beating area foe Chelsea 3-0 on April 17, claiming the second seed in Area 6 behind area winner Pelham. They finished the regular season with a 7-7-1 record, but were coming off of back-to-back losses at the hands of Spain Park and Indian Springs.

The game with Homewood did not go the Lions’ way from the beginning. The Patriots netted four goals in the first 25 minutes of the game, and added a fifth with less than six minutes to go in the first half to take an insurmountable 5-0 lead into the break. Briarwood never truly threatened the Homewood defense, and was hard pressed to possess the ball on the attacking half of the field. Homewood controlled most of the possession, and had ample opportunities, which they capitalized on.

The second half was more of the same. After a rare Briarwood chance in the form of a corner kick was denied, Homewood counterattacked and scored its sixth goal of the game just three minutes into the second half on a questionable offsides no-call. The game remained stagnant at 6-0 for much of the second half before Homewood added their final goal, bringing the score to 7-0 with 10 minutes left in the game.

Matthew Wood of Briarwood provided the lone bright spot on the field on a day where those were few and far between for the Lions with just over two minutes left in the game. Wood broke free and scored with 2:38 on the clock, and Briarwood avoided the shutout.

The Lions finished their season with a 7-8-1 record.

Briarwood splits first two games with Homewood in 6A playoffs

Carson Cupo of Briarwood throws a pitch in the first game of the second round, 6A playoff series between Briarwood... read more