Pelham gets past Northridge, advances in playoffs 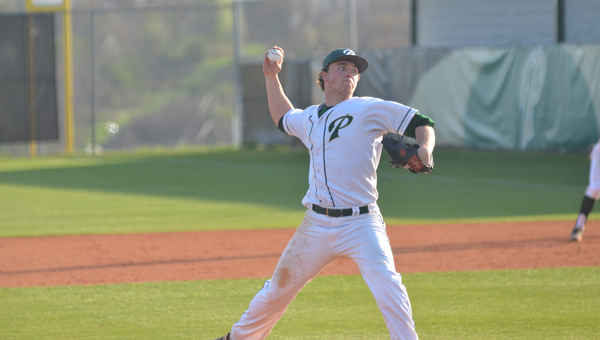 Sam Finnerty pitched a complete game for Pelham in the first game of the 6A second round state tournament series with Northridge. The Panthers won the first two games 6-0, 6-5 to advance. (File)

PELHAM – In the second round of the 6A baseball playoffs, the Pelham Panthers chalked up two more wins, this time against Northridge, to advance to 4-0 in the state tournament and move into the third round. The series with Northridge saw Pelham win two very different games. The first game of the series the Panthers were never truly tested, and won 6-0, while in the second game Pelham built a lead, lost it, and had to fight back in extra innings to seal the win.

Sam Finnerty took the mound for Pelham and did what he has done consistently all season; win. Finnerty threw a complete game, seven-inning effort, only giving up one hit in the process.

“Sam did a tremendous job,” Pelham head coach Sean Anderson said. “You know your pitcher is doing his job and has composure when you commit five errors behind him and he doesn’t allow a run.”

Even with Finnerty throwing smoke, the game was still tied 0-0 in the top of the sixth inning before Pelham scored. One run in the sixth and five runs in the seventh were more than enough to get the win.

“Our bats finally woke up in the sixth and seventh innings,” Anderson said.

Connor Radcliff took the mound to start the second game for the Panthers. Radcliff threw 6.1 innings, hurled 102 pitches, gave up six hits and four runs while striking out nine. Cole Whitman replaced Radcliff in the seventh inning, but only pitched the final two-thirds of the seventh. The game required an eighth inning, which was pitched by Alex Weeks.

The Panthers took a 4-2 lead into the seventh before Northridge made things interesting. Three runs in the top of the seventh gave the visiting Jaguars an unexpected lead heading into the last half inning of regulation. Hunter Stovall singled to start the bottom of the inning, and advanced to second when Logan Brashier hit a sacrifice fly. Three batters later, with two outs and Stovall still on second base, Casey Alday smacked a clutch single to center field, which was enough to score Stovall and extend the game to an eighth inning.

In the bottom of the eighth inning, Finnerty scored the wining run from second base when Stovall hit a walk-off single to left field, winning the game and the series.

“The team showed a lot of resiliency after taking the lead, losing the lead, and coming back to tie the game then winning the game.” Anderson said after. “This game was definitely a team effort.”

Next up for the Panthers is Hillcrest, with the first game scheduled to start Friday, May 1 at 4:30 p.m.

The Briarwood Christian Lions fell 7-1 in the first round of the 6A state tournament on April 25 at the... read more