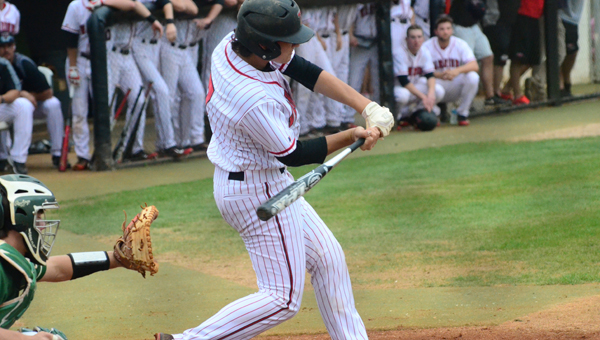 Jonathan Crawford takes a cut at a pitch in the opening game of the series between Thompson and Mountain Brook. The Warriors beat the Spartans two games to one and will advance to the second round where they will take on Vestavia Hills. (Reporter Photo / Baker Ellis)

ALABASTER – In what amounted to one of the best three-game stints in 2015, 7A No. 3 Thompson defeated No. 2 Mountain Brook in the first round of the state tournament over a two-day stretch from April 24-25 to advance to the second round. The Spartans took the first game in nine innings by a final of 7-6, but Thompson responded in the second game of the day with a 10-3 win to force a game three. In the winner-take-all final game, the Warriors again proved to be the stronger team and won the decisive game three 9-3.

The Warriors found themselves down 6-1 in the bottom of the fifth inning in the first game before plating five runs in the bottom half of the inning to tie the score, and give a showcase of their offensive abilities. The 6-6 stalemate held through the seventh and forced extra innings, where the Spartans eventually won after knocking a lone run across the plate in the top of the ninth to take a 1-0 lead in the series.

Once again, the Warriors waited until the eleventh hour to pull this game, and their season, back from the brink. Resident ace Stephan Poplin took the mound in the second game and pitched a complete game, seven-inning effort. Poplin gave up 10 hits but only three runs and struck out five.

As the final inning of the game, and potentially the season, approached, Thompson was on the wrong side of the scoreboard. Down 3-1 in the top of the seventh, the Warriors needed to find some offense, immediately. To put it modestly, they found it.

After leadoff batter Riley Reach flied out to the Mountain Brook shortstop, the next five batters reached base either via error or hit. Colin Lillie then reached base on a fielder’s choice, which scored Poplin who had been at third base and gave the Warriors a slight 4-3 lead, but Thompson was not done. Six more runs crossed the plate for Thompson with two outs in the bottom of the seventh, giving the Warriors the 10-3 lead and the win. The defeated Spartans squad had squandered an opportunity to advance, and had breathed new life into the Thompson cause.

In the decisive game three, JC Parker took the mound for Thompson and pitched a complete game. He threw 100 pitches over seven innings, gave up seven hits and three runs, only one of them earned, and struck out three. The Warriors continued their run of scoring in bulk, as seven of their nine runs came in the bottom of the fourth inning. At one point, Thompson was up 9-0 before the Spartans added three runs over the sixth and seventh innings, however the Warriors did what the Spartans had not been able to do just a day before and quelled any comeback attempt that Mountain Brook was hoping for, and won the game and the series 9-3.

On the heels of the dramatic, come-from-behind series win, life will not get easier for the Warriors. Thompson will host 7A No. 1 Vestavia Hills in the second round of the playoffs, starting May 1 at 5 p.m.