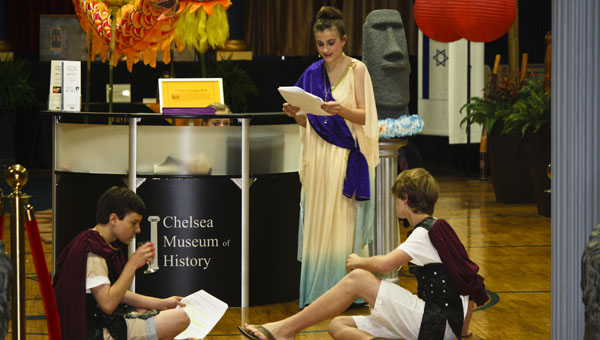 Students at Chelsea Middle School portrayed characters in different historical time periods during a Night at the Museum program on April 20. (Contributed)

CHELSEA – Visitors touring the “Chelsea Museum of History” in the Chelsea Middle School gymnasium April 20 saw more than just artifacts in each exhibit.

Seventy-five Advanced Ancient World History students at CHMS portrayed characters and civilizations throughout history during the second Night at the Museum program.

The program was based on the 2006 movie “Night at the Museum,” in which a night security guard at the Museum of Natural History sees the exhibits and their inhabitants come to life after hours.

Black said the program was part of a project students have been working on since the beginning of the year. They had to research groups and civilizations throughout history, write a research paper and develop the characters they portrayed in skits and exhibits in the program.

“It makes them responsible for their own learning,” Black said. “They become experts on their characters.”

Eighth grader Sara Blevins was a narrator in a skit about hunter-gatherers in prehistory.

“I think it was nice because we got to live what we learned in a way,” Blevins said.

Eighth grader Olivia Harris portrayed a storyteller in Sub-Saharan Africa and said speaking in front of an audience was beneficial.

“It prepares you for things later in life,” Harris said. “You really have to practice and be confident.”

Black, who played the museum security guard, said the project prompted students to do more critical and creative thinking as they researched and determined how to depict their characters and the time period.

“They were graded on how authentically they can bring a character and civilization alive,” he said.

The Helena Huskies boys soccer team defeated the Ramsay Rams 10-0 on Friday, April 24 in the first round of... read more