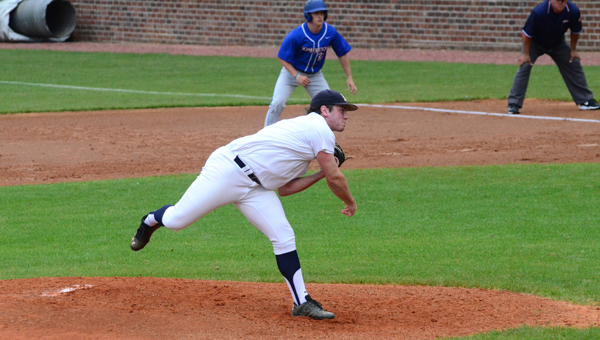 Carson Cupo of Briarwood delivers a pitch in the first of three games in the Lions second round playoff series with Homewood. Cupo hit a walk-off single in the bottom of the ninth inning in the third game of the series to keep Briarwood’s season alive. (Reporter Photo / Baker Ellis)

NORTH SHELBY – It took nine innings and some late game heroics, but the Briarwood baseball Lions’ season will continue. Briarwood survived a scare against No. 7 Homewood on Monday, April 27 in game three of their second round playoff series to advance to the quarterfinals of the 6A state tournament.

The fifth ranked Lions beat the Patriots twice in the regular season, and beat them in the first game of their second round playoff matchup. However, Homewood bounced back to take game two and push the series to a decisive game three, which was scheduled for Saturday, April 25, however inclement weather pushed the final game to the 27th. What resulted was a nine-inning, come-from-behind classic.

All of Homewood’s regulation runs came via home run. Griffin Rivers hit a solo shot to left field in the second inning, and Will Hunt sent a three-run bomb over the center field fence in the top of the fourth to give the Patriots a seemingly commanding 4-0 lead, which they took into the fifth inning. In the fifth inning, Carson Cupo slammed a leadoff triple to right field and later scored when Carter Bankston hit a sacrifice fly to make the score 4-1. Two more runs in the same inning brought the Lions most of the way back, and they went into the sixth inning down just 4-3.

The Lions scored another run in the sixth after Cupo scored as a result of an error by the Homewood third baseman, Adam Stewart, and the 4-4 scored held through the end of regulation.

The teams traded blanks on the scoreboard in the eighth inning before Homewood seemed to put the nail in the coffin on Briarwood’s season. Hunt took the very first pitch of the ninth inning over the right field wall for his second home run of the contest, and Russell Brasseale later scored as a result of a Stewart double to give Homewood a 6-4 lead heading into the bottom of the ninth.

With one out and two men on base, Harrison Cain smacked a line drive double to center field to tie the game at 6-6. Luis Fuentes was intentionally walked, and John Michael Pegusky flied out to right to bring up Cupo. With two outs and a 3-1 count, Cupo got enough of a piece of Alex Hammond’s offering to score Cain from third base, giving Briarwood the 7-6 win and the series win.

Both teams used three pitchers on the night. Next up for the Lions is Area 12 winner Pinson Valley.

Bethany Rogers looks to make a move during Calera’s April 25 10-0 victory over Ramsay. This was a first round... read more