Helena sweeps Jemison, advances to third round of playoffs 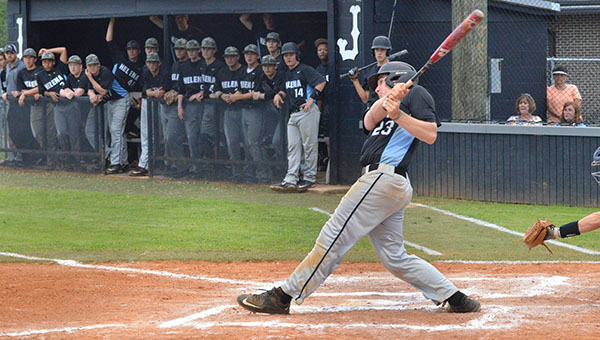 The Helena High School baseball team recorded two wins on Friday, April 24 at Jemison to advance to the third round of the AHSAA 5A State Baseball Playoffs. (Contributed)

JEMISON–The Helena Huskies baseball team will live to fight another weekend after successfully sweeping the Jemison Panthers on Friday, April 24 to advance to the third round of the AHSAA 5A Baseball playoffs. Helena’s bats came alive in game one of the doubleheader, as the Huskies defeated the Panthers 11-3. Helena also held Jemison to just three runs in game two as Helena won 7-3, clinching the series win.

Helena had a lot to show on offense in game one of the doubleheader and the majority of the Huskies 11 runs scored came in the top of the fifth inning.

The Huskies collected five runs in the inning after an error, wild pitch, an RBI single by Jameson Ling and a two-run single by Brooks Brophy.

Brophy led Helena with three hits in the game and Brophy, Connor Romanowski and Colton Hood all tied for a team-high with two RBIs a piece in the game.

Helena faced more adversity in the second game of the double header and saw themselves fall behind 3-1 heading into the bottom of the third inning.

The Huskies managed to tie the game 3-3 in the bottom of the third after a two-run homerun by Sam Praytor.

Helena then took the lead in the bottom of the fourth inning after scoring two more runs going ahead 5-3.

Helena never turned back in the game and ended up winning 7-3.

Brooks Brophy once again pitched a gem for Helena, striking out six over the span of the seven innings he pitched.

Next up for the Huskies is Marbury, with the first game scheduled to start Friday, May 1 at 4:30 p.m.

The Helena High School baseball stadium construction has been completed and Friday will mark the first game ever played at HHS.

The Helena Huskies became the Class 5A Area 7 champions and will take on Ramsey in the first round of... read more