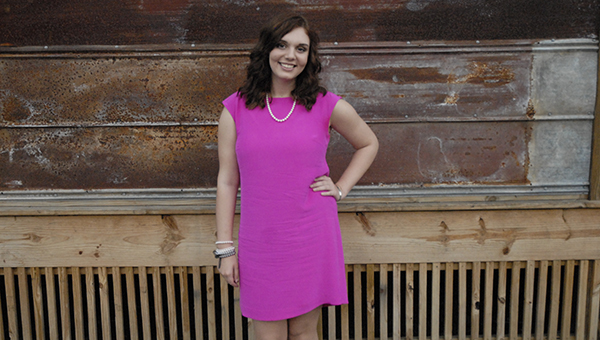 Helena High School senior Maddie Crain missed six weeks of school after enduring pain from a blood clot that went from behind her belly button to behind her left knee. (Reporter Photo/Graham Brooks)

HELENA–It all started as muscle pain Helena High School senior Maddie Crain was experiencing in her leg last December. The muscle pain turned out to be more complex than Crain and her parents realized, and over the next few months, Crain would endure some tough times physically while still trying to juggle school work obligations in order to graduate on time.

Crain first went to an urgent care and they said her pain could be caused from anything from a kidney stone to an ovarian cyst.

Ultrasounds were done and the next day Crain noticed numbness and swelling in her leg.

Crain went back to the urgent care the following day and doctors attempted to find a pulse in her ankle and leg and could only find a faint pulse.

Crain was then taken to Brookwood Hospital where she described the events that took place once taken back in a room.

“When they saw my leg they said they were going to do an ultrasound to see if it was a blood clot which is what they were worried about,” said Crain. “The ultrasound showed that I had a blood clot from behind my belly button all the way down to just below my left knee and that’s where everything started.”

Crain was sent to Children’s Hospital that night and was in and out of the intensive care unit for four days where she was monitored closely.

Blood clots can become dangerous if they spread and at one point Crain developed pulmonary embolism but described her situation as “lucky” because the symptoms weren’t too severe.

Doctors placed a device in Crain that would prevent the clot from spreading to vital parts of her body and they discovered two gene mutations with one being Factor V Leiden.

“Both mutations do the same thing,” said Crain. “It means that my body can make clots fine, it just can’t break them down.”

Crain had to learn to give herself two injections a day and while all of the trips to the doctor piled up, Crain still had to worry about school.

Weeks went by with no real progress and after seeing a vascular surgeon at UAB, Crain was admitted to the hospital the first of February and was prepped for surgery.

Crain had three surgeries within a 24-hour period and doctors had cleared out close to 75 percent of the blood clots and placed stints in the vein so there wouldn’t be more problems down the road.

Today, Crain is only on one blood thinner medication and currently 80 percent of her clots are cleared up.

Crain and her mom Amy Bolt had nothing but good things to say about the teachers and administrators at HHS and the support she received from the Helena community while missing close to six weeks of school.

Crain is a member of the Helena Belles and plans to attend the University of Alabama in the fall where she plans to major in nursing.

Carson Cupo of Briarwood delivers a pitch in the first of three games in the Lions second round playoff series... read more