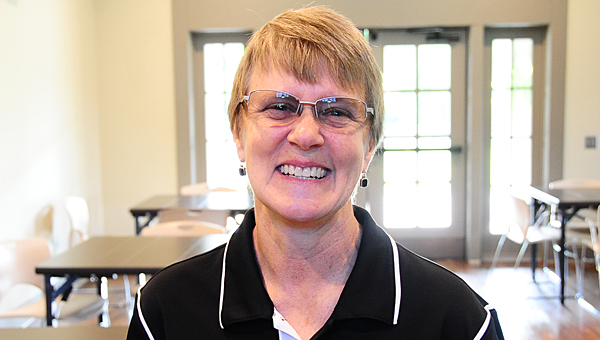 The Alabaster Board of Education voted to hire Judy Green as the new Thompson High School volleyball coach and director of volleyball operations during an April 27 meeting. (Reporter Photo/Neal Wagner)

ALABASTER – The former head coach of the University of Alabama volleyball team, who currently serves as director of volleyball operations at UAB, will lead the Thompson High School volleyball program after she was hired by the Alabaster City School System on April 27.

During a special-called meeting, the Alabaster Board of Education voted to hire Judy Green as the Thompson High School head volleyball coach and director of volleyball operations.

“We are really excited about it,” Alabaster School Superintendent Dr. Wayne Vickers said during an April 27 phone interview. “She’s got 28 years of coaching experience: 10 at Montevallo, 15 at Alabama and three at Birmingham-Southern. She is 20th on the all-time victory list with the NCAA.”

She served as head coach of the Birmingham-Southern volleyball team for three years before heading to UAB.

Green said she plans to finish her coaching career at THS, and said she is looking to bring state championships to Alabaster. She said she has begun keeping a journal each time she has “begun a new chapter” in her life, and said the entry for April 27 read “It’s an awesome day to be a Warrior.”

“It’s been a long time since I’ve been this happy in my life,” Green said. “The last time I felt this way was probably when I was hired at Alabama.”

Through her contract with the Alabaster City School System, Green will not serve in a teaching role at the school, instead focusing solely on the athletic roles. She will step down from her role at UAB to take the THS position, Vickers said.

“She will make what is allowed for a contract employee, which is about $23,000 right now,” Vickers said.

Green will take over at THS after former coach Kellyanne Gandy stepped down at the end of the 2014 season.

“This is a big hire for us,” said Alabaster School Board President Adam Moseley. “I think it shows the commitment we have to all of our programs. To have someone of her talent and knowledge to mentor our young ladies will be phenomenal.”

Jonathan Crawford takes a cut at a pitch in the opening game of the series between Thompson and Mountain Brook.... read more