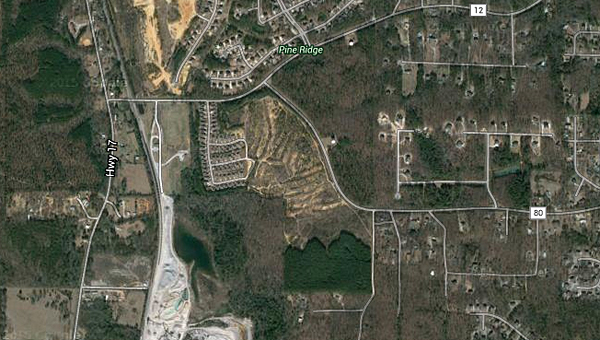 A developer is looking to bring a new subdivision to Alabaster near the intersection of Butler Road and Shelby County 80. (Contributed)

ALABASTER – A developer is looking to bring about 70 new homes to Alabaster, and city leaders are looking for feedback on the project before voting on a rezoning request on the land.

On April 27, the Alabaster City Council set a public hearing for its May 26 meeting to gather public input on the proposed rezoning. The Alabaster Planning and Zoning Commission previously voted to recommend the rezoning, which would affect about 40 acres near the intersection of Shelby County 80 and Butler Road in the southern end of Alabaster.

The property currently is zoned a mixture of R-3 residential and B-3 business. The South Grande View development company, which owns the land, requested the city rezone the property to all R-3 to allow for a new neighborhood.

The Alabaster Planning and Zoning Commission previously voted to recommend the City Council move forward with rezoning the property.

During an interview after the April 27 meeting, Ward 7 Councilman Tommy Ryals said the property originally was zoned a mixture of R-3 and B-3 to allow for “neighborhood-type businesses” to locate near the intersection of Shelby County 80 and Butler Road.

“The original plan was to get businesses to come to that corner so folks wouldn’t have to drive all the way to 119. But most businesses don’t want to relocate that far off the main corridor,” Ryals said.

An R-3 zoning would allow for about three homes per acre, but the density will be lower for the lots abutting the Windy Oaks and Maple Ridge subdivisions, Ryals said.

“Any lot that abuts Windy Oaks or Maple Ridge would be larger,” Ryals said. “This gives us a little bit of transition. The terrain out there is also going to keep the density down.”

The Tuesday, May 26, public hearing will be held at Alabaster City Hall during a City Council meeting, which will begin at 7 p.m.

“Based on what (this developer) has done before, and what they’ve shown us, it will be a quality development,” Ryals said.

‘Organized Chaos’ to commence at CHMS on May 1

By EMILY SPARACINO / Staff Writer CHELSEA – Chelsea Middle School students will have a chance to throw food at... read more