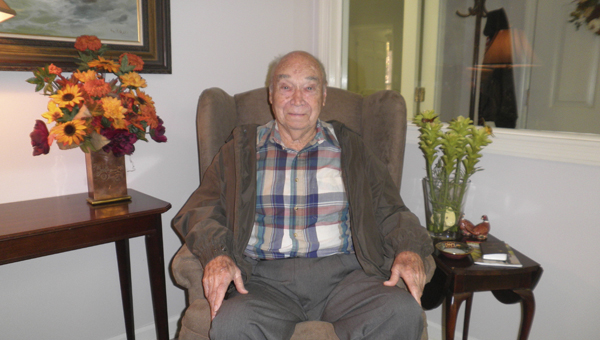 COLUMBIANA – A former mayor and beloved resident of Columbiana passed away April 24 at age 94 after many years of selfless service to his city and country.

Jefferson Dowell “Buck” Falkner served Columbiana as mayor, city councilman and city superintendent in stints totaling 33 years, and operated a clothing store in the city for many years.

“We are just going to miss the man that Mr. Falkner was – the image of a loving, kind, caring person,” daughter-in-law Janice Falkner said. “He wanted everybody to be happy, and he wanted to make them happy.”

Buck Falkner served as grand marshal for the Liberty Day Celebration and was the grand marshal in the Columbiana Christmas Parade in 2010.

“He was such a wonderful ambassador for our city,” Columbiana Mayor Stancil Handley said. “He loved Columbiana.”

Handley said he knew Falkner for 35 years as a man that was quick to give support and advice.

“When I first came to Columbiana as a young practitioner, he was one of the first people in the community to come to me and offer his assistance,” Handley said. “That started a friendship that remained until the end of his life. As mayor, he was always very gracious and very well thought of. I think his legacy would be he was always there and was willing to assist anyone and everyone.”

Falkner graduated from Shelby County High School in 1938 and was crew chief for airplane mechanics repairing B-24s, 25s and 26s in England during World War II, according to his obituary.

Falkner was given an honorary lifetime membership to the Alabama Natural Gas Association by its board of directors and he served as treasurer for eight years.

He was on the last Birmingham Honor Flight to Washington, D.C., in 2012 with daughter-in-law Janice Falkner; her father, the late Joe McCormick; and brother-in-law Jack. All three men were WWII veterans.

Falkner was a member of First Baptist Church of Columbiana.

His father, the late Curtis Jefferson Falkner, was Shelby County’s sheriff years ago.

“His roots in Columbiana go back several generations,” Handley said of Buck Falkner. “The loss of Mr. Falkner as a former leader and a citizen of Columbiana is a great loss for the city of Columbiana.”

Though his military and municipal stints were temporary, Falkner served his family, friends and neighbors his entire life.

“Buck was one of the finest, most easy-going people I’ve ever known in my life,” Columbiana attorney Butch Ellis said of his longtime friend. “He didn’t have a selfish bone in his body. He was always thinking about you.”

Falkner was married to the late Lorene Falkner for 67 years and had two children, Terry Falkner and the late Jefferson Dowell Falkner, Jr.

Ellis traveled frequently with Falkner and noted his ability to “make good, solid friends” with anyone they encountered.

“Everywhere we went, people would fall in love with him,” Ellis said. “My whole family loved him. We loved him as everybody else did. We’ve lost one of the great ones.”