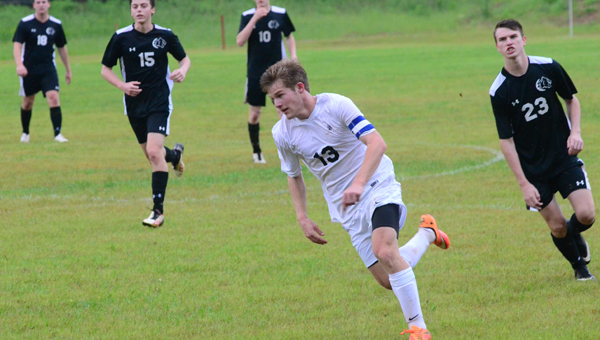 NORTH SHELBY – The top ranked 1A-3A Westminster School at Oak Mountain Knights made short work of visiting Prattville Christian in the opening round of the 1A-3A boys soccer state tournament on April 28, winning by a final of 9-1. Westminster, now 13-1-2, has only lost one game all year. That loss came at the hands of 7A No. 3 Hoover by a single goal, 3-2 on April 20. The two games the Knights have tied have come against another 7A school, Spain Park, on Feb. 24, and against 6A Homewood in the opening game of the season on Feb. 13.

The Knights showed in the opening round of the state tournament why they are the top-ranked 1A-3A team in the state. In the first half of the first round game with Prattville Christian, Westminster knocked in four goals and was in complete control from start to finish. The Knights are not a big squad, but are fast on the ball and have good technical skill. They lulled the Panthers to sleep time and again with a series of tight, close midfield passes before either hitting a streaking teammate down the sideline with an accurate long ball, or simply beating a Prattville Christian defender one-on-one. Jack Wilson scored the first goal of the game before senior captain Jack Stein knocked in a pair. Fellow senior captain Michael Stanford added the last goal of the first half, and Westminster took a commanding 4-0 lead into the break.

Stein added his third goal of the game on a filthy strike early in the second half to bring the Knights’ total to five. Westminster pulled a number of its starters at that point, and the game began to get bogged down at midfield on the soggy Tuesday afternoon. Jared Keeler added the sixth goal of the day for the Knights before Prattville Christian knocked one into its own net to bring the score to 7-0.

The Panthers finally got on the board late in the second half to avoid the shutout, however Wilson added another goal soon after to bring the lead back to seven. Caleb McNaughton punched in the final goal of the day for the Knights, and they walked away with the 9-1 win.

The road gets immediately more difficult for Westminster at this point, as they will take on 1A-3A No. 2 Indian Springs on Saturday. Indian Springs is the defending 1A-4A state champion and was responsible for knocking Westminster out of the state tournament last season.