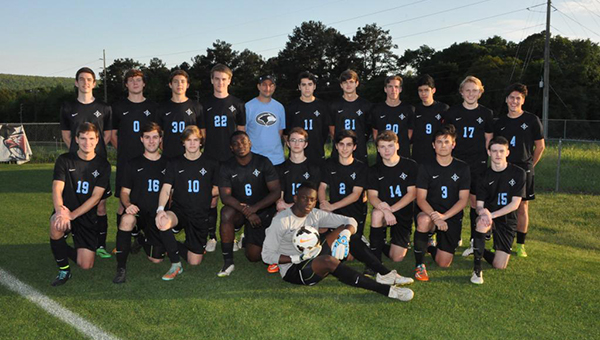 The Helena Huskies boys soccer team advanced to the third round of the state playoffs after defeating Jemison 3-0 on Tuesday, April 28. (Contributed)

HELENA–Much like the regular season, the Helena Huskies boys soccer team had to fight through wet and soggy field conditions as they took on the Jemison Panthers in the second round of the AHSAA 4A-5A state playoffs.

The Huskies once again met area opponent Jemison, but this time the loser of the game had their season end. The Huskies recorded two regular season victories over the Panthers in weeks prior and the result on Tuesday, April 28 was much of the same, as Helena defeated Jemison 3-0 to advance to the third round of the playoffs.

All three of Helena’s goals came from Matt Sheets, who had a very impressive game. Sheets first goal came at the 32-minute mark in the first half when he hit a header into the net. Landon Gaskins was given credit for the assist on the goal.

Sheets netted another goal with 11 minutes left in the first half to give the Huskies a 2-0 halftime lead.

The Huskies continued to be aggressive and attack on offense and a final goal was recorded with 33 minutes left in the second half as Sheets scored another goal with Gaskins once again receiving credit for the assist.

Helena head coach Zach Morgan was happy for the victory but admitted his team came out a little sluggish due to a few players returning home late the prior night from a band trip and then had to take the ACT the next morning.

“It was a good game by both teams and they took it to us on midfield and we were playing slow and tired at first,” said Morgan.

Helena will take on Marbury in the third round of the playoffs on Saturday, May 2 at 2 p.m.

The Helena Huskies boys soccer team defeated the Ramsay Rams 10-0 on Friday, April 24 in the first round of... read more