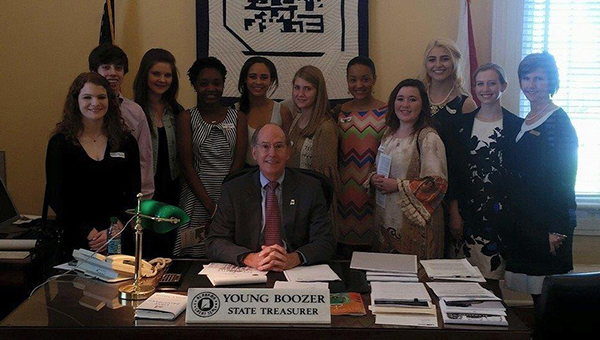 Helena Teen Council members took a tour of the state capital and pose with State Treasurer Young Boozer in his office. (Contributed)

MONTGOMERY–Ten members of the Helena Teen Council got the privilege of visiting the state capital on Tuesday, April 21, where they saw some of the inner workings of government and were introduced to some important members of Alabama government.

The event was coordinated through Sen. Cam Ward, R-Alabaster, where they toured the Capitol building, had lunch with Ward, Rep. Matt Fridy, R-Montevallo and Rep. Arnold Mooney, R-Birmingham.

After lunch, there was a great exchange between the entire group on how both sections of the government work and balancing the State budget.

The group then toured the Museum of Alabama located in the Archives and History Building.

A rare part of the trip was the fact that the group also met Alabama State Treasurer Young Boozer, who gave the council a tour of his office and took some time to explain what his job entails.

Helena Councilwoman Cris Nelson was one of the adult chaperones on the trip and she described how informative and insightful the trip was for her as well as the students.

“It was a very enlightening trip and we appreciate the courtesies extended to us by the office of Senator Ward,” said Nelson. “It was my first time taking the tour and I learned a lot of information myself.”

The group also visited both the Senate and House sessions that were actively debating bills and were recognized by the Speaker of the House and the Lt. Governor.