Oak Mountain climbs back from early deficit, beats Vestavia Hills in opening round 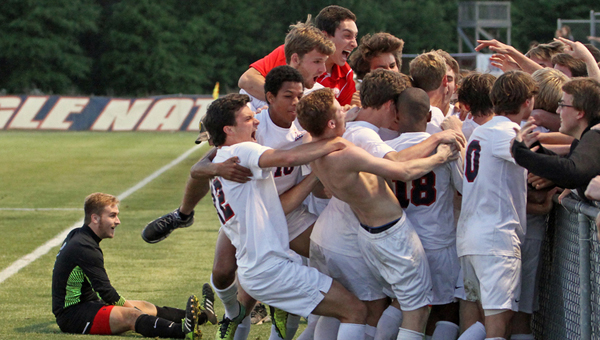 The Oak Mountain boys soccer team beat Vestavia Hills in the first round of the 7A state tournament on April 28 by a score of 2-1. (Contributed / Omhsboyssoccerphoto.com)

VESTAVIA HILLS – April 28 marked the fourth meeting this season between 7A No. 2 Vestavia Hills and No. 3 Oak Mountain. The Rebels held a 2-1 lead in this year’s series, had outscored the Eagles by a combined 7-2 and had recently shelled Oak Mountain to the tune of 4-0 on April 14. The first three games, however, carried no weight on April 28 as the two teams met in the first round of the 7A state tournament.

The Eagles have had their season ended at the hands of Vestavia each of the last two years in the most heartbreaking fashion: in the state championship game. Before the emergence of the 7A classification this year, Oak Mountain and Vestavia routinely dominated 6A competition, with the Rebels getting the better of the Eagles when it mattered most in 2014 and 2013. The Eagles also lost the 2012 state championship as well, but that loss came at the hands of Auburn. This means the seniors on this Oak Mountain squad have made the finals every year they have been in high school, but have never broken through to win a championship.

All of this said, it is something of a shame that two of the best teams in the state were matched up against each other at the earliest stages of the inaugural 7A tournament. But the concentration of talent in the Birmingham area is so deep that it was an unavoidable fact some great teams would make early exits.

This Eagles squad brought all of this history into the first round matchup with the Rebels, and hoped to use it to their advantage. Through the first half, however, Vestavia held a 1-0 lead.

15 minutes into the second half, Oak Mountain drew even when Kennedy Davis knocked in a cross from Nathan Heim to draw even. 15 minutes later, Chad Jeter collected a long ball pass from Davis and plunked it into the back of the Vestavia net to give the Eagles the lead, which they held on to for the last 10 minutes to escape with the round one win.

“It was an unbelievable game,” Oak Mountain head coach Daniel DeMasters said. “We didn’t want to show them everything two weeks ago, we were looking at the big picture. A lot of preparation went into this game.”

DeMasters, in his first year at the helm for the Eagles, had glowing remarks for the Rebels program. “We have so much respect for their (Rebel’s) program and (Vestavia head coach) Rick Grammer,” DeMasters said. “They’re a great team.”

With the win, the road will not get much easier for Oak Mountain. The Eagles will travel to Hoover on Saturday to play the Bucs in the second round at 7 p.m.

Breeze will not return as Oak Mountain baseball coach