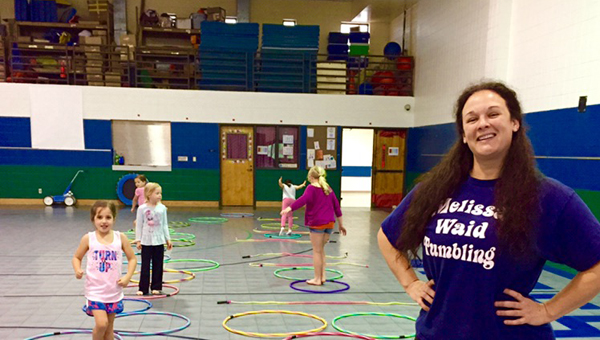 Melissa Waid, longtime gymnast instructor, poses with some of her students. (Contributed)

For Melissa Waid, gymnastics is in her DNA. Ever since she was a child it has played a tremendous role in her life. In fact, it was something that her father and uncles would do for fun in their spare time in their younger years along with swimming. Waid describes her family as “flippers” and she most enjoys the positive ramifications of the sport.

“My favorite thing about gymnastics is that it keeps you in shape and healthy,” Waid said. Waid credits her athletic family for laying the foundation for her success in the sport, which has led to a long and fulfilling career as an instructor.

Waid began her teaching career at American Gymnastics on Valleydale Road, the same place where she was originally taught. “I actually began teaching when I was 11 or 12 and I’m 40 now,” she said.

Now, after all these years, she still manages to work literally every day. “I work seven days a week. Monday through Friday I do the Shelby schools and after that I go to private gyms and teach” said Waid.

Among the Shelby County institutions that Waid makes the rounds at are the Helena, Oak Mountain, Inverness and Calera schools. On the weekends she solely works at Legacy Gymnastics in Pelham. This is where she trains gymnasts, cheerleaders and dancers from 2-22 years of age. All in all, Waid instructs around 100 students total every week.

Throughout her illustrious career, she has taught just about every gymnastic and dance competition imaginable. She even has done Ms. Fitness World and Ms. Fitness USA competitions. According to Waid, these matches usually end with first or second place honors for her pupils.

Waid teaches as high as college-level competitors, but for the most part grooms younger children where she teaches the basic skills of gymnastics. “They learn tumbling, hand stands, back bends, splits, tuck jumps, forward and back ward rolls, and lots of stretching,” Waid said. “These skills turn into more progressive abilities later on.”

Oak Mountain climbs back from early deficit, beats Vestavia Hills in opening round

The Oak Mountain boys soccer team beat Vestavia Hills in the first round of the 7A state tournament on April... read more