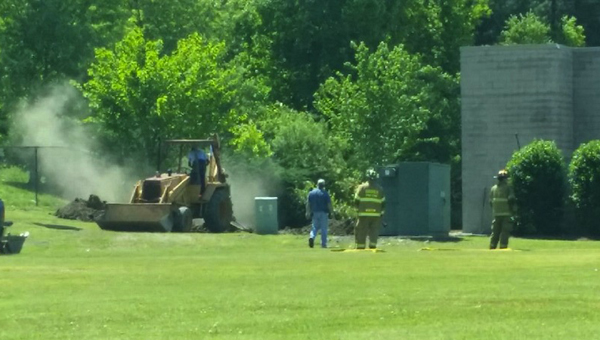 The Hoover Fire Department responded to a natural gas leak near the Lee Branch shopping center on April 30. (Contributed)

HOOVER—A natural gas leak on U.S. 280 forced evacuations near the Lee Branch shopping center in the morning on April 30.

The Hoover Fire Department was called to the scene of the leak around 10:45 a.m. after a natural gas line was severed between the Taziki’s Mediterranean Cafe and Cowboys gas station.

The Hoover Fire Department, assisted by the North Shelby Fire Department, cleared and secured the area, and evacuated “a few people.” The fire departments also had to shut down a cooker at the Cowboy gas station that was cooking ribs, Lowe said.

“We took all the precautions until the gas company arrived,” Lowe said. “The gas company responded very quickly, as they always do.”

The gas company stopped the leak within roughly an hour, Lowe confirmed.

By BAKER ELLIS / Sports Editor The following is a comprehensive list, by classification, of all Shelby County athletes who... read more