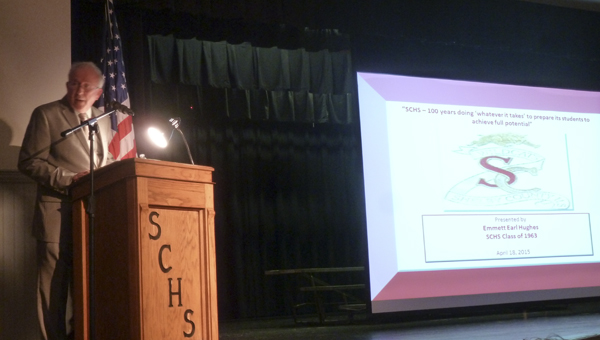 Organized by the SCHS Alumni Association, Randy McDonald chairman, the day was filled with people reminiscing of days gone by.

SCHS Principal Gene Rogers welcomed the attendees after a reception in the school lunchroom where scrapbooks and memorabilia were available.

He shared that in 2014, the school’s graduation rate was 92 percent, a great achievement, as well as all time high ACT comp scores of students.

Alumnus and veteran Charles Duncan, ’67, led the Pledge of Allegiance as the colors were presented by Troop and Pack 560 of Wilsonville.

Denisen Justice recited the Bible verse Psalm 19:14 that was said at the beginning of school during the 1950-1960s: “Let the words of my heart and the meditation of my heart; be acceptable in Thy sight, O Lord, my rock and my redeemer.”

The National Anthem and SCHS Alma Mater were sung by the SCHS Show Choir led by Choral Director Ashlyn Delianides.

“I want to pay tribute to SCHS for its 100 years of doing ‘whatever it takes’ to prepare a student to achieve his or her potential in life,” said Hughes. “This is our school’s chosen mission and vision.”

The program concluded by singing “Amazing Grace,” benediction led by Leslie Whiting, and special presentation to McDonald for his years of service to SCHS.