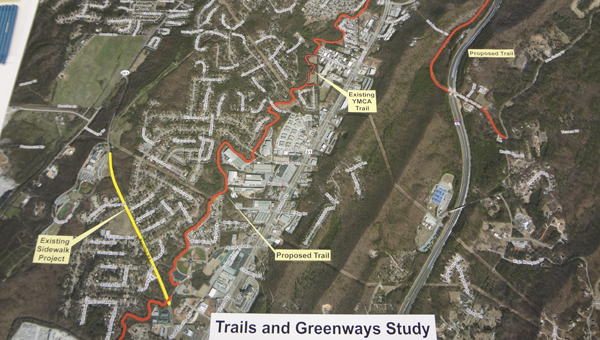 PELHAM – Different components of Pelham could be connected to each other by a trail and greenway system in the next few years if the city’s plans for the project continue to fall into place.

Residents heard during a Town Hall meeting April 30 an update on plans and information about the proposed system from a feasibility study being conducted by Sain Associates.

Jennifer Brown, assistant project manager with Sain Associates, shared an overview of the study, which is intended to serve as a resource to city leaders as they make decisions regarding the proposed trail and greenway system.

Pelham City Council President Rick Hayes said the objective of the study is to figure out how the project can be funded and completed, and whether any obstacles could halt its progress.

“It’s better to find these out in the planning process,” Brown said.

The proposed alignment of the system follows along Bishop Creek, beginning at the Bearden Road entrance to Pelham City Park and connecting Pelham High School to Oak Mountain State Park, and the new middle school to the park.

The trail would serve as a means of connectivity and a “recreational facility” for a variety of users, including cyclists, runners, walkers and nature lovers throughout the city.

Hayes said the trail would likely span more than 3 miles in length if all sections are completed.

The trail has the potential for various surface treatments and limited interaction with motor vehicles.

The width of the path could be between 2 feet and 10 feet.

As part of the study, Sain performed a hydraulic review of Bishop Creek to determine whether the system could compound the city’s flooding issues.

Brown and Hayes said the trail would not worsen flooding, but instead could help alleviate it.

Hayes said creating detention ponds along the trail could be “great recreational areas” and allow storage in flooding situations.

“We see a lot of opportunities to help the flooding significantly,” Hayes said.

Brown said the feasibility study could be finished by the end of the summer.

“We’re very excited about this,” Hayes said of the project. “We know this is the first step.”

What are the possibilities for Medical Mile, Siluria?

The Regional Planning Commission of Greater Birmingham presented possible layouts for the Medical Mile and Siluria district (pictured) during an... read more