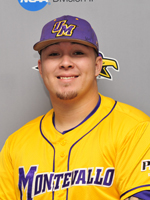 University of Montevallo junior Steven Knudson was named the Peach Belt Conference Player of the Week for the second time this season on April 28.

AUGUSTA, Ga. – University of Montevallo junior Steven Knudson was named the Peach Belt Conference Player of the Week for the second time this season on April 28.

Knudson put the hammer down in five games last week, all against nationally-ranked opponents. The first baseman from San Francisco, California hit .526 with a 1.105 slugging percentage. He hit home runs in all three games against Peach Belt Conference regular-season champion North Georgia and had all seven of his RBIs for the week in that series.

Knudson began his week hitting .500 against West Alabama in two games, but raised the bar with a .545 mark at North Georgia.  He went 2-for-4 in the opener with a homer and two RBIs, added another homer and three RBIs in game two and had his third homer and two more RBIs in a 3-for-4 outing in the finale.  He added a pair of doubles and drew four walks for a .609 on-base percentage.

Knudson finished the season with 24 home runs, which ranks him second all-time in the Falcons’ record book for most home runs in a single season.

Knudson’s 24 homers this year is second in the PBC and tied for fourth nationally.  He is also fourth in the PBC in RBIs and second in total bases and slugging percentage.

Kelsey Vining was named the Peach Belt Conference Freshman of the Year and was awared a place on the First... read more