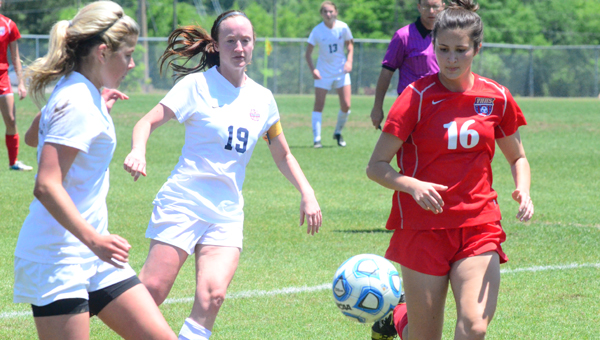 Alexandra Dunn and Sydney Jeter battle for a loose ball during Oak Mountain’s May 2 second-round matchup with Vestavia Hills. The Lady Eagles won the game after three rounds of penalty kicks to advance to the Final Four. (Reporter Photo / Baker Ellis)

NORTH SHELBY – May 2 marked the fourth time this season the Lady Eagles of Oak Mountain faced the Lady Rebels of Vestavia Hills. The two schools have been ranked near the top of class 7A for the entire year, and ended the regular season ranked first and second respectively. Oak Mountain finished the regular season with a 20-3-1 record, with two of the three losses and the tie all coming against Vestavia. The fourth game was the only one that truly mattered however, as the winner advanced to the 7A Final Four and the loser went home.

Vestavia needed only nine minutes to break into the scoring column, as the Lady Rebels slammed home a goal via a deflected free kick to take an early 1-0 lead. Oak Mountain responded late in the first half when Sydney Jeter knocked home the equalizer to go into the half tied 1-1.

Both teams traded chances in the second half, but neither could pull ahead, and the game went to overtime. After two scoreless overtime periods, it headed to penalty kicks.

It was somewhat ironic that two of the best teams in the state had to determine a winner with penalty kicks, but there was no other recourse for two teams with such a microscopic difference in talent.

Both teams traded one make before trading a miss as well. Alexandra Dunn knocked in the 25th penalty kick of the game, and Vestavia finally cracked, missing the 26th to give the Lady Eagles the win and the Final Four berth.

Katie Denney saved three penalty kicks between the posts for Oak Mountain. The Lady Eagles will next take on Bob Jones on May 8 for a chance at the 7A state title.

Carter Bankston and the Briarwood Christian Lions lost two of three games to Pinson Valley in the third round of... read more